“Patriotism is the exact opposite of nationalism. Nationalism is a betrayal of patriotism”. - Emmanuel Macron, French President.
News
World 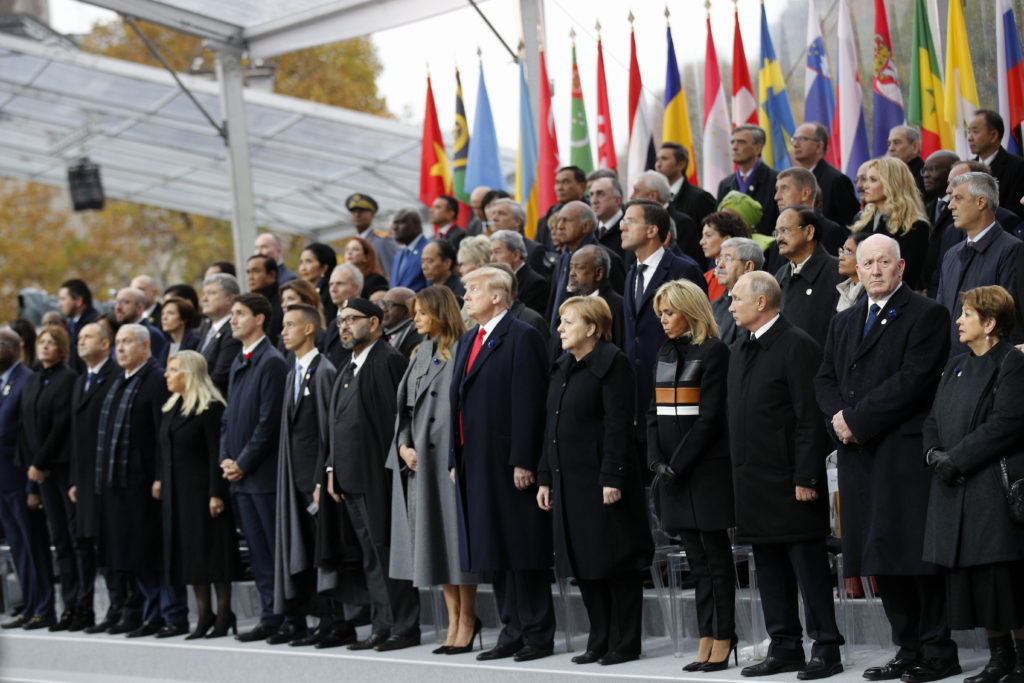 Standing in solidarity at the Arc de Triomphe in Paris, leaders of world nations observed the ‘100th Anniversary of World War I’ on November 11, 2018.

More than 60 heads of states and governments took part in a memorial ceremony at the Tomb of the Unknown Soldier, a powerful reminder of those who died in the war between 1914-1918.

French President Emmanuel Macron and his wife Brigitte followed by ‘world leaders’ walked to the site amidst a dull and gloomy weather and the sound of bells.

American President Donald Trump arrived separately to the event while Russian President Vladimir Putin was the last to appear at the ‘war memorial’.

The memorial ceremony began at 11:28 AM a couple of minutes after the original time 11 AM, when the war ended 100 years ago on the same day.

German Chancellor Angela Merkel stood between Trump and Macron, a symbolic representation of the ‘victors’ and ‘fallen’ in the war.

As the gathering fell into silence, Macron used the occasion to send a powerful message on ‘fragility of peace’ and the ‘dangers of nationalism’.

“The old demons are rising again, ready to complete their task of chaos and of death,” Macron said beginning with his message.

“Patriotism is the exact opposite of nationalism. Nationalism is a betrayal of patriotism,” he said. In saying ‘Our interests first, whatever happens to the others,’ you erase the most precious thing a nation can have, that which makes it live, that which causes it to be great and that which is most important: Its moral values.”

Macron also recalled the one billion shells that fell on France alone between the four years of World War I.

During the ‘peace forum’ Macron reinstated the purpose of the memorial. He warned dignitaries about the crumbling international harmony.

“Will it be the shining symbol of durable peace between nations or will it be a picture of a last moment of unity, before the world goes down in new disorder?” Macron asked. “It depends only on us!”

Not only did the memorial ceremony serve as a warning to those in power of starting a third world war, it also served as joyful reminder of the impacts of peace.

Remembering Fallen Soldiers
At the occasion, high school students read letters that soldiers and civilians wrote 100 years ago when the war ended at the Western Front.

The saddening notes had only one message to give,” Please, do not make our mistakes.”

“I only hope the soldiers who died for this cause are looking down upon the world today,” American soldier Capt. Charles S. Normington wrote on Nov. 11, 1918, in one of the letters. The whole world owes this moment of real joy to the heroes who are not here to help enjoy it,” read one of the letters.

Similarly, Australia and New Zealand held ceremonies to recall the haunting memories of the World War where tens of thousands of their soldiers and civilians lost their lives.

These countries lost a major chunk of their soldiers in Europe, especially in the 1915 Gallipoli battle in Turkey.