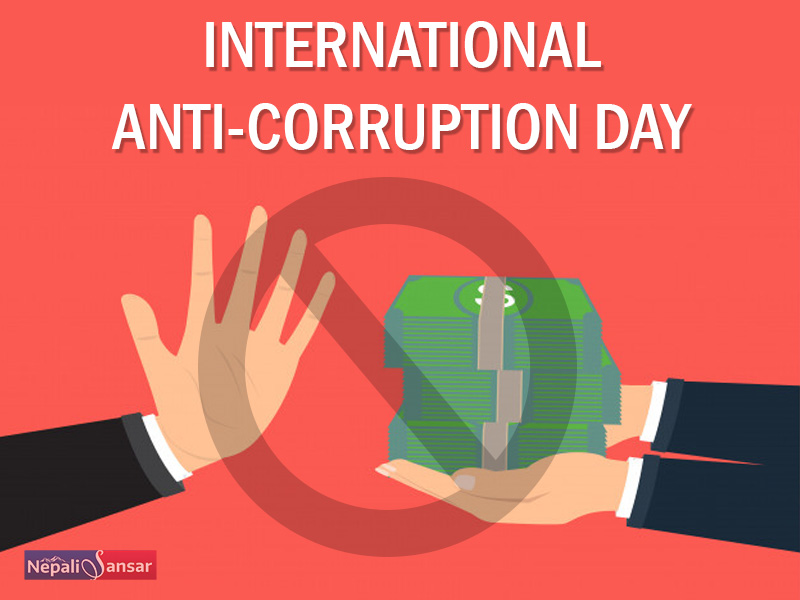 Countries around the world observed Anti-Corruption on December 09, 2018!

Nepal marked this important event by conducting various programs across the country, which includes the Commission for Investigation and Abuse of Authority (CIAA) events in Kathmandu.

“Corruption is present in all countries, rich and poor, North and South. It is an assault on the values of the United Nations. It robs societies of schools, hospitals and other vital services, drives away foreign investment and strips nations of their natural resources”, said Antonio Guterres, UN Secretary General on the International Anti-Corruption Day.

Adding further he says, corruption undermines the rule of law and induces crimes including illicit trafficking of people, drugs and more.

“Tax evasion, money laundering and other illicit flows divert much-needed resources for sustainable development. The World Economic Forum estimates that the cost of corruption is at least $2.6 trillion – or 5 percent of the global gross domestic product. And according to the World Bank, businesses and individuals pay more than $1 trillion in bribes each year,” Guterres adds.

The UN official opines that corruption is a vicious cycle that fosters a culture of impunity.

He also persuades everyone to stand up for integrity on the occasion.

“Millions of people around the world have gone to the ballots this year with corruption as one of their top priorities. On International Anti-Corruption Day, let us take a stand for integrity,” said Guterres.

According to UN, every year USD 1 trillion is spent on bribes and moreover, an estimated USD 2.6 trillion are stolen per year – a sum equal to more than 5 percent of the global GDP.

Furthermore, in developing countries, funds lost to corruption are estimated at 10 times the amount of official development assistance!

History
The General Assembly adopted the UN Convention against Corruption on October 31, 2003, to raise awareness for anti-corruption.

It directed the Secretary-General to designate the United Nations Office on Drugs and Crime (UNODC) as secretariat for the Convention’ Conference of State Parties (resolution 58/4).

This year the UN marked the International Day against corruption with the theme The Power Of People’s Pressure.

Corruption Fact: One in four people say that they have paid a bribe to access public service in the past twelve months.