Nepal and Bangladesh will compete on October 29, 2018 to decide Group A representative for the SAFF U-15 Mens Championship finals
News
Sports 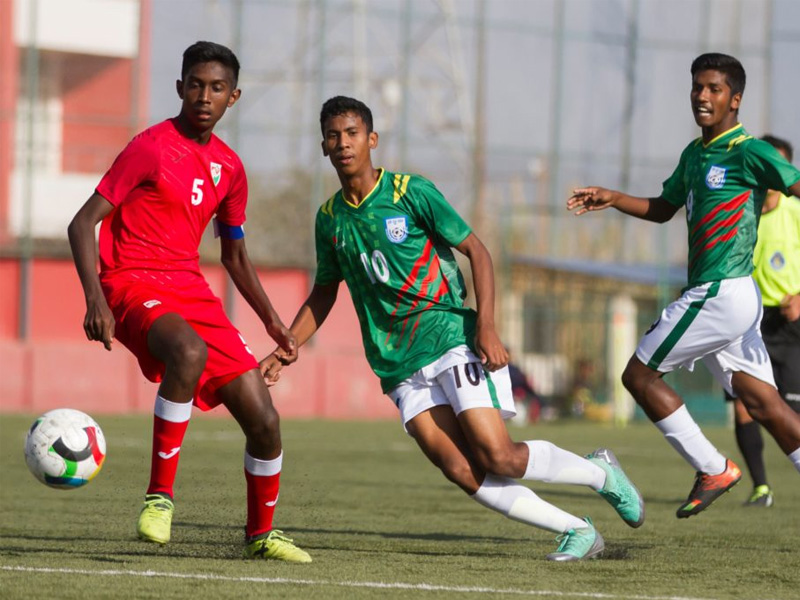 The SAFF U-15 Men’s Championship has taken off in full swing and in an exciting turn of events, host-country Nepal marked its arrival in the semi-finals!

In the match held between Nepal and Maldives on October 27, 2018, the former defeated the opponent at 4-0 to secure its place in the semis.

As for Maldives, after successive defeats from Bangladesh and Nepal, the team had to give up all hopes on winning a trophy this year.

Nepal Vs Bangladesh
Nepal will now compete with Bangladesh on October 29, 2018 to decide a strong Group A representative for the finals.

Bangladesh has been displaying a remarkable performance since the Championship started. It defeated Maldives on October 25, 2018 with a whopping 9-0!

Currently, both teams, Nepal and Bangladesh share the same position on the performance chart with ‘three points’ each.

Group B Status
In the meanwhile, Pakistan beat Bhutan 4-0 to establish its position in the semi-finals. Following this, the India Vs Bhutan match on Nov 1, 2018 will decide which team will take on Pakistan in Group B semi-finals.

Although the match begin on an equal note for both countries, the course of the game decided Nepal winner over India.

Striker Rekha stood out by giving Nepal victory-defining shots at the 59th and 88th minute.

All’s well that ends well, we hope Nepal continues to display a brilliant performance in its upcoming matches in both championships.