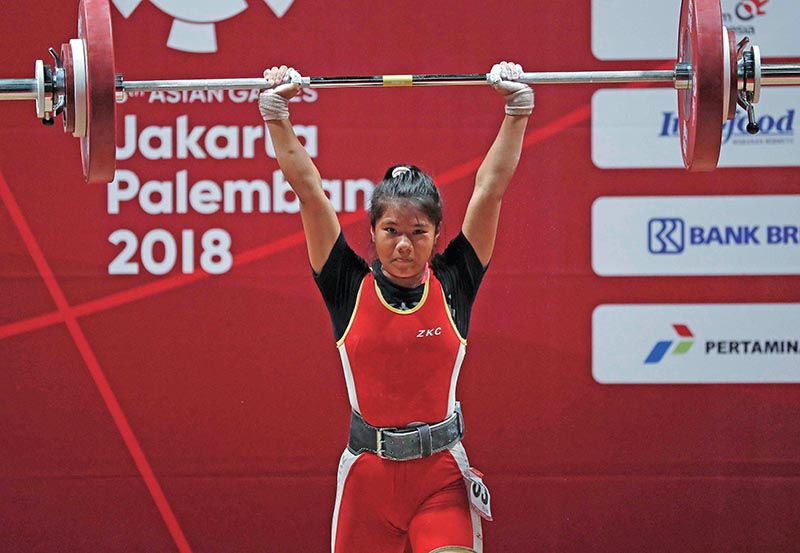 Nepal saw new national records as part of the ongoing Asian Games 2018 in the form of weightlifting.

As the world was watching, the country’s weightlifting contestant Sanju Chaudhary set three new national records at the 18th edition of ASIAD currently underway in Jakarta of Indonesia.

In the women’s 53-kg division bettering, Chaudhary lifted 72-kg in snatch and 86-kg in clean & jerk, accounting to a total lifting capacity of 158-kg.

With this, Choudhary broke her own national record she had set earlier with 71-kg in snatch and 85-kg in clean & jerk accounting to a total weight of 156-kg in the Asian Games Selection in June earlier this year.

However, Chaudhary failed to beat her 12 opponents in the championship and was spotted at the bottom position below contestants from Philippines, Turkmenistan and Thailand, among others.

Unfortunately, the country also saw the downfall of its Taekwondo and Swimming contestants & 2016 Rio Olympians Nisha Rawal and Sirish Gurung, on the same day, alongside weightlifting that lifted the country a little!

“We need to evaluate our performance rather than focusing on medal. Other countries have made huge investment in taekwondo, but we are in the same standard as we were four years ago. If things go the same way, we will remain at the same level four years later as well. The players have done what they needed to,” says Nepal Taekwondo Coach Bista.

“I will try to give my best in the 100m freestyle,” said Gurung.

Hope their relentless efforts haunted by continuous challenges will bring the best to Nepali contestants in the ongoing Asian Games 2018.