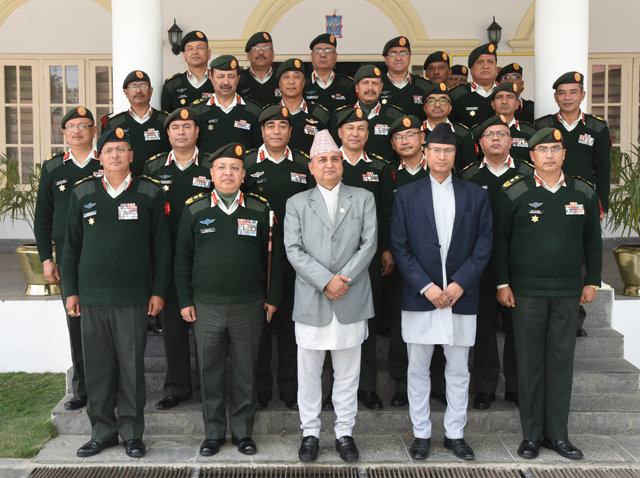 In a recent update concerning the Nepal Defense Ministry, the Nepal Army has asked the Ministry to revise the Army Act 2006 to widen its investments.

“The existing Act prevents us from investing as promoter. This is a barrier in widening our investments,” said Brigadier General Raghu Bhandari, Director, Nepal Army Welfare Fund (NAWF) in his address at a press conference in Kathmandu.

The Nepal Army is keen on revising the recommendations of the said Act as it restricts them from investing funds in energy, financial, business and other sectors, Bhandari says.

Currently, it is  not happy with the limited interest earned from the NAWF’s billions of rupees deposits in commercial and development banks. NAWF has cash deposit of Rs 35.77 billion and investments worth Rs 5.52 billion in various sectors.

Potential Areas of Investments:
It wishes to invest its deposits in two hydropower projects and in treasury bills that will earn the welfare fund more returns that it gets from banks.

Additionally, it is has proposed to the Nepal Department of Electricity Development (DoED) for the construction of 25 MW Dudh Khola and 32 MW Bhimdang Khola hydropower projects, before NAWF authorities can amend the Act.

DoED is willing to open Bhimdang Khola for investments, out of the two Manang-based projects.

What Experts Say?
There should be clarity on which areas the Nepal Army can invest in, said a security expert. The army should dedicate its focus to producing the things it needs rather than engaging in commercial activity. It’s money can be invested in the creations of arms and ammunitions, uniforms and other requirements.

Nepal House of Representatives member and security expert Dipak Prakash Bhatta said the Army who’s foremost duty is providing security should not pursue matters that make it vulnerable to controversy.

He also adds that to approve the amendment, it will have to get the Nepal Cabinet’s approval even before the Federal Parliament’s attestation.

In the past, it decision of leasing Tri-Chandra Military Hospital for business, running petrol stations in the country and selling land plots to staff has landed the army into controversy and receiving false accusations such as ‘focus on commercial gains’.

Chapter 6 of the Nepal Army Act 2006 provisions that the amounts saved from meeting the cost of welfare activities which are conducted from the interest of the fund, should be deposited in various Banks and financial institutions.