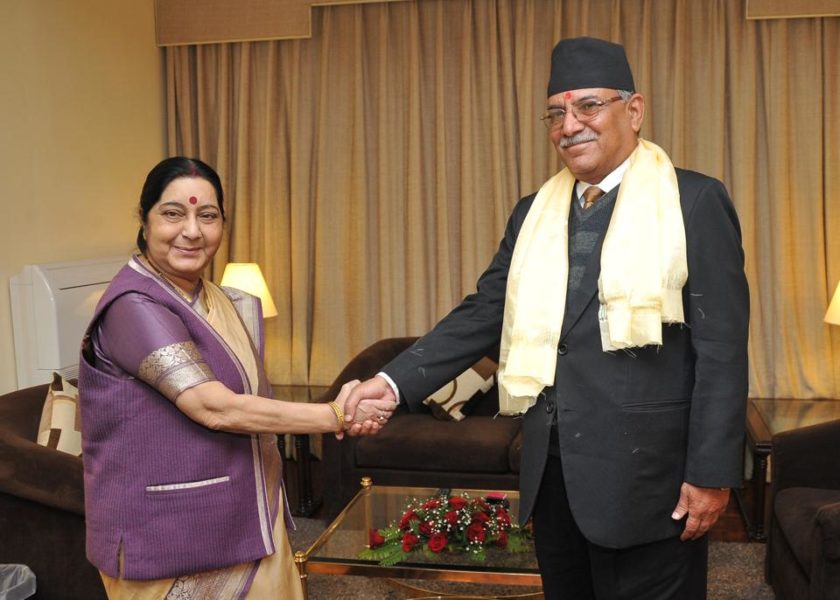 In a first such visit by a high-level Indian official post Nepal’s 2017 general elections, Indian External Affairs Minister Sushma Swaraj has embarked on a two-day visit to Nepal during February 1-2, 2018.

Termed as a goodwill visit, this bilateral visit is being considered as a welcoming message for the start of India’s cordial relations with the Communist-led Government of Nepal that is yet to be formed.

As part of the visit, Swaraj called on the President of Nepal Bidya Devi Bhandari and also held discussions with a wide range of high-level Nepali politicians including CPN-UML Chairman K P Sharma Oli, CPN-MC Chairman Pushpa Kamal Dahal and Chairman of Nepal’s Federal Socialist Forum Upendra Yadav, among others.

During the discussions, Swaraj assured Indian Government’s full-fledged support to Nepal in its development and also in taking ahead bilateral ties between both the nations.

In a one-one discussion with Dahal, Swaraj said, “We will extend full cooperation to Nepal in attaining political stability and development.”

In response, Dahal reportedly said, “The talks we had were very positive and constructive. We discussed about the situation emerging after the conclusion of the elections and the preparation for formation of new government. Swaraj assured that India will extend full cooperation to Nepal in her efforts towards attaining political stability and development.”

Meanwhile, the Communist Alliance is currently busy in preparing for the formation of new Nepali Government, post which, Indian Prime Minister Narendra Modi is also most likely to visit the Himalayan nation (according to CPN-UML).

“Modi telephoned Oli twice and both leaders invited each other for a visit to their countries,” informed CPN-UML Secretary Pradip Gyawali.

Gyawali also informed that the formation of Communist-led new Nepal Government and proposed unification of both the left parties will be completed by March 2018.

In an interesting update that boosts Indo-Nepal ties, India has almost doubled its financial allocation to Nepal for 2018-19 in its annual Union Budget unveiled on February 01, 2018.

“The budgetary increase indicates it is likely to cover the earthquake reconstruction fund that was in the pipeline for some time and was discussed with the Nepalese leaders,” former Indian Ambassador to Nepal Ranjit Rae said in a statement.