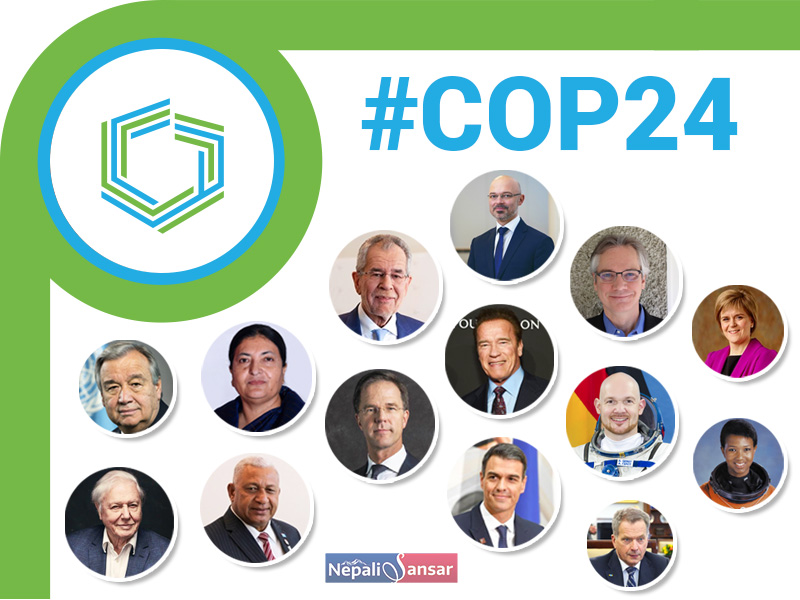 In continuation to the Paris Climate Accord, the #COP24 Climate Change Conference has commenced on December 02, 2018 laying down the path for further action plans on ways to address emissions and climate change concerns, globally.

Around 200 countries and their Heads of the States are taking part in the #COP24 Summit, which is also seeing wide traction from various globally-renowned climate change experts, scientists, environmentalists, and many others from all sections of the society, globally.

“Even as we witness devastating climate impacts causing havoc across the world, we are still not doing enough, nor moving fast enough, to prevent irreversible and catastrophic climate disruption” – Antonio Guterres, UN Secretary-General

“We feel as if we have been penalized for the mistakes we never made…. It is incumbent upon the international community to ensure that justice is done”– Bidya Devi Bhandari, President of Nepal

“The choice before us all has never been so stark. Act now with courage and resolve … Or, god forbid, ignore the irrefutable evidence, and become the generation that betrayed humanity and our responsibility to future generations” – Frank Bainimarama, Prime Minister of Fiji, Outgoing COP President

“Here in Katowice, we must recapture the spirit of Paris” – Mark Rutte, Prime Minister of The Netherlands

“Saving the arctic is needed to save the globe” – Sauli Väinämö Niinistö, President of Finland.

“Science has done its work, so we have to do ours” – Pedro Sánchez Perez-Castejón, President of Spain

“Our generation is the first to experience the rapid increase in temperature around the globe, and it will probably be the last generation to hold the key to beat the climate crisis” – Alexander Van der Bellen, President of Austria

“You’re wrong when you say that America dropped out of the Paris Agreement”arnold schwarzenegger, former governor of california – Arnold Schwarzenegger, Former Governor of California

“The international community was able to successfully tackle the existential threat of ozone layer depletion. We can do the same thing with #greenhousegas emissions. We need reality checks and we need hope. The earth doesn’t need us; we need the earth.” – Mae Jemison, First African-American Woman in Space

“Everything’s at stake now. As 20 000 experts from 90 countries gather in #Katowice for the world’s biggest climate forum @COP24, it’s up to all of us to remember there is #NoPlanetB” – Alexander Gerst, Astronaut at European Space Agency

“Without zero emission transport, holding the increase in global average temperature to well below 2 degrees C and pursuing efforts to limit warming to 1.5 degrees C will simply be impossible. We need to act and we need to act now” – Michal Kurtyka, COP24 President

“If we don’t take #ClimateAction, the collapse of our civilisations and the extinction of much of the natural world is on the horizon” – Sir David Attenborough, Natural Historian

“This is going to be one of the most difficult negotiations we’ve seen yet. There are so many moving parts.” – Andrew Light, Sr. Climate Change Adviser at the State Department under President Barack Obama

#COP24 seeks serious action plans and future strategies from the world nations on how they would control the growing emissions to bring it to the level of 2 Degrees in line with the Paris Accord….See: #COP24 Agenda

More in the offing….