World Theatre Day 2018: For Nepal, Theatre is Not Just Entertainment!

Besides entertainment, theatre also has a special role as a medium of influencing masses
Entertainment
Special Stories 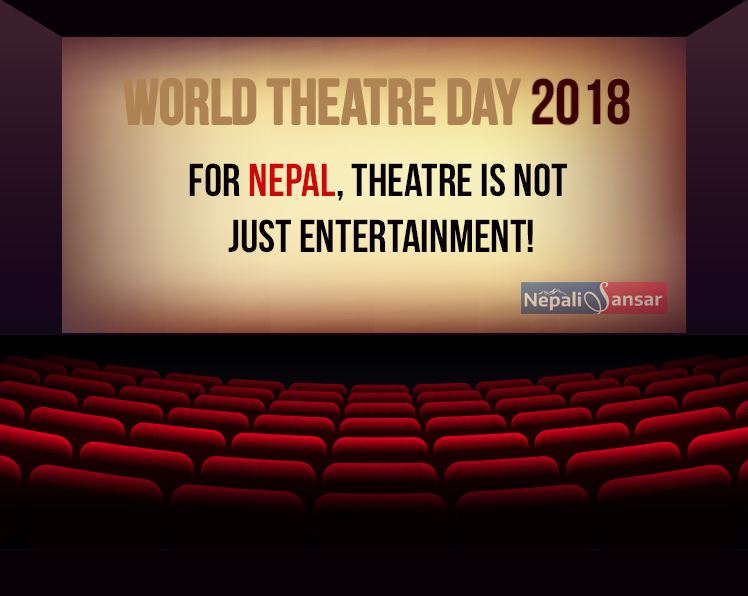 The world owes a lot to the field of drama and theater, which have been helping mankind in every possible way by giving a physical form to internal emotions on stage.

In recognition of the contribution of theater and art, World Theater Day is celebrated on March 27 every year.

Commemorating the World Theater Day 2018, a wide variety of theater shows and events were conducted across the world on March 27, 2018.

Nepal, in specific, holds a special place for the field of drama and theater as evident in the presence of many theater groups across the country.

Commemorating the World Theater Day 2018, let’s take a look at some of Nepal’s famous theater groups that are forming a base for the Nepali theater industry.

Nepali Theater for A Cause

Besides entertainment, the theater also has a special role as a medium of influencing masses.

Nepal has a good number of theater groups that are majorly focused on social justice, peace and harmony, and public welfare, besides art and entertainment.

While some choose closed theater auditoriums, some choose streets to demonstrate their plays.

Each of the aforementioned groups has a strong intention behind them.

Nepali movies, plays, artists, directors and writers have earned wide recognition across the global platforms for their works.

Besides presenting and participating, Nepali artistes also have a special mark across the globally-renowned film institutes. Very recently, renowned Film and Television Institute of India (FTII) Pune has selected 30 Nepali films for a three-year course.

Sponsored by the Government of India, the course has a total of Nepal’s leading artistes belonging to the theater and cinema including Sulakshyan Bharati, Pratik Dulal, Sabina Gopali, Malina Joshi Rohit (Rumba) Tamang, Samyam Puri, Parikshit Bickram Rana, among others.

Despite the emergence of different presentation forms, the theater has always been special by itself, and in fact, formed the base for today’s most-sought film industry.

However, there are some instances where we observe theater art facing a fade-off due to lack of public and governmental support. For a country like Nepal that boasts of rich forms of traditional art and culture, theater means a lot in promoting the same. Let’s hope the theater gets its needed boost in Nepal like in many other countries and continues contributing to the Nepali society.