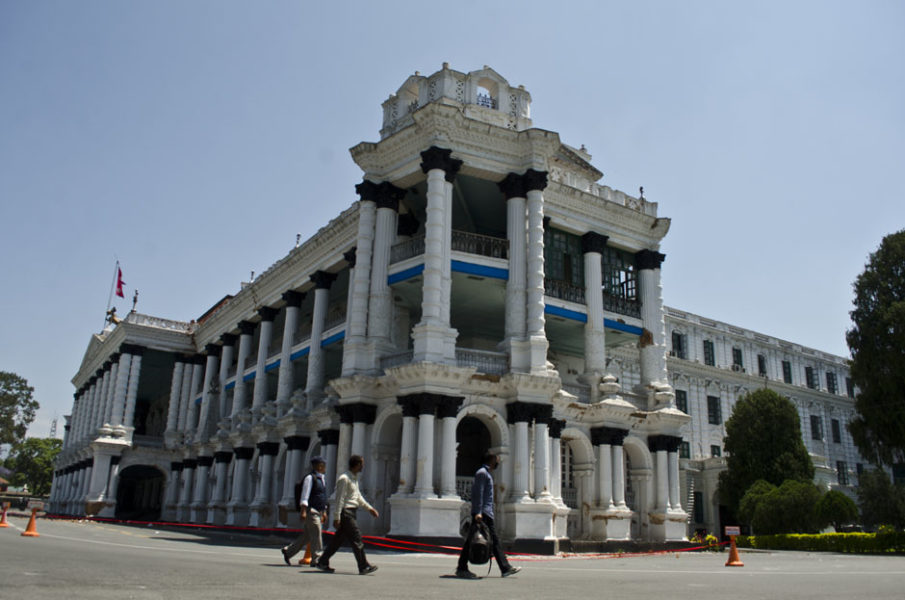 In the wake of security concerns around Kathmandu’s Singha Durbar, the Government of Nepal has come up with new measures tightening visitors’ entry to the historical palace that is also housing government departments.

In a recent update, the government restricted all the 20 ministries including the Prime Minister Office and Office of Council of Ministers from issuing permits to public visiting Singha Durbar.

The Ministry of Home Affairs (MoHA) is formulating new rules and will hold the responsibility of enforcing new orders in the wake of reported security threat and overcrowding around Singha Durbar premises.

We are planning to implement the new rule under which one-door approach will be adopted for issuance of entry passes and separate entry & exit gates will be designated for the general public and VIPs/VVIPs, says Indra Jit Rai, Security Adviser to the Home Minister Ram Bahadur Thapa.

“The existing temporary pass system will be scrapped,” he added.

Currently, all ministries hold authority to issue visitors permit to Singha Durbar upon request to visit any ministry in the Singha Durbar premises.

Streamlining The Process
The new rules also apply to lawmakers, former ministers and political leaders in their way to Singha Durbar to visit any ministers’ residence in Pulchowk. Now, high-level officials can meet the ministries only at their official residences and offices.

Because of overcrowding, even secretaries could not meet the ministers to get files signed. Issues of around 60-70 per cent visitors can be handled by ministers’ aides, but presently even those people are directly meeting the ministers, adds Rai.

Especially, the people from rural areas are not being able to meet the concerned ministry officials because of the priorities given to high-level government officials and political leaders.

“They feel humiliated and their genuine issues remain unaddressed. So, we seek to address these issues through the new security policy,” Rai said.

Surveillance on Priority
Headed by MoHA Joint Secretary, the Singha Durbar Security Committee will finalize the rules and the Home Ministry is planning to deploy advanced surveillance systems under new security measures.

“Powerful CCTV cameras and body scanners will be installed at the gates. Suspected individuals will be arrested immediately by security personnel,” informed Rai, adding that visitors can only meet the official designated to them in the permit that would be issued on the first-cum-first-serve basis.

“The plan is to have a modern security system at Singha Durbar,” adds Rai.