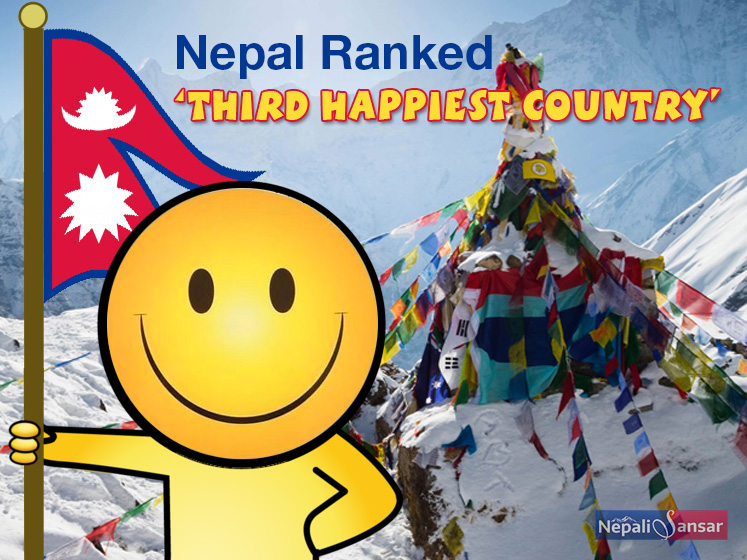 In an exciting update for Nepal, the recent ‘global happiness survey’ conducted by the United Nations Sustainable Development Solutions Network placed Nepal as the ‘third happiest country’ in South Asia and the 100th happiest country, globally.

The Himalayan nation climbed one spot higher from last year.

Neighboring countries such as Pakistan and Bhutan stand at 1st and 2nd positions in South Asia’s list of happiest countries. Both the countries achieved a rank of 67 and 95, respectively.

On the other hand, Indian and Afghanistan were placed at the lowest ranks – 140 and 154, respectively

According to the World Happiest Countries report, following are the ranks of South Asian countries:

Meanwhile, in the global context, Finland has been ranked as the ‘most happiest country’ in the world for the second successive year. The report finds that Finland’s happiness has been slowly increasing since 2014.

Following next in line are Denmark, Norway, Iceland and Switzerland, which emerged as the ‘top five happiest countries in the world’.

Mentioned below is a list of the top 10 happiest countries in the world:

Austria made its headway into the top 10 by replacing Australia, who was among the previous list of top 10 happiest countries.

While most countries witnessed increased happiness in the last ten decades, it was Benin’s growth that surprised the world this year. The country jumped 50 places higher on the global happiness index since 2005-08.

The Global Happiness Report was compiled on the basis of factors such as:

The annual report is based on survey results from the previous three years.

“Global data on national happiness and evidence from the emerging science of happiness shows that the quality of people’s lives can be coherently, reliably, and validly assessed by a variety of subjective well-being measures, collectively referred to as ‘happiness’,” states the Global Happiness report.

Nepal’s ranking is a reflection of the country’s effort in formulating development policies in line with the country’s main goal of ‘Prosperous Nepal, Happy Nepali’.

Congratulations to the Nepal Government!