In an alarming scenario, the rate of murders in Mexico in 2018 has increased further by 33 percent breaking the record for the second consecutive year, said official reports on January 20, 2019.

The latest information published by the Interior Ministry showed that investigators opened to 33,341 murder cases in the running year compared to the previous year’s record of 25,036. The new information poses a serious challenge to the new Mexican President Andres Manuel Lopez Obrador who assumed office in December 2018. (#MexicoMurders)

By gender, the statistics report a rise in the number of women victims. Around 861 cases of women murders were reported in 2018 compared to 735 in 2017.

The country has reportedly seen more than 15,000 killings in the first half of 2018, the highest since 1997 including the most-famous Mexican drug war in 2011.

The state emerged as the country’s second-most violent with a homicide rate at 71 murders per 100,000 inhabitants during the first half of 2018. Another dangerous state Colima reported a 27 percent rise in killings and a homicide rate of 80 per 100,000. #MexicoKillings

Surprisingly, the aforementioned homicide rates in Mexican states stand more than the number in two of the world’s deadliest countries Honduras and El Salvador that report 60 per 100,000.

Meanwhile, the central state of Guanajuato reported 122 percent rise in homicides at 40 per 100,000, with majority attributed to fuel thieves. 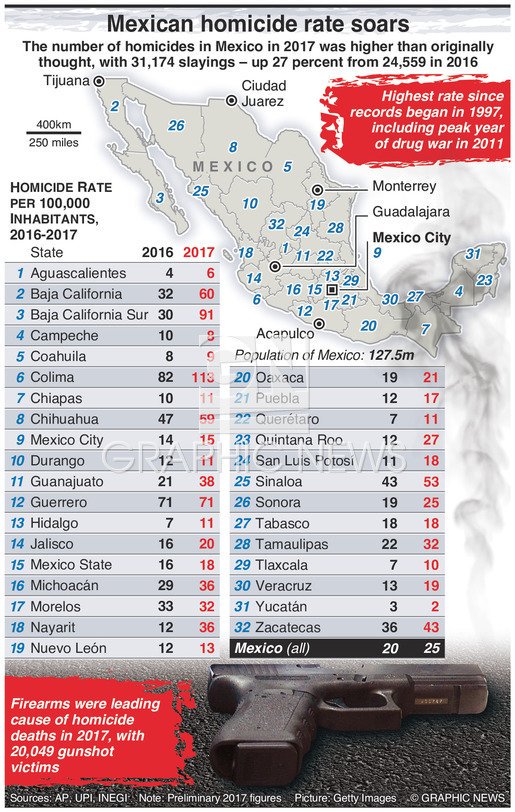 The violence rate in Mexico was majorly attributed to the war against drug cartels in the country.

It’s surprising that around 200,000 people were murdered since the government deployed the army to curb drug trafficking in 2006.

The northern border state of Baja California has reported a drastic rise in murder rates at the mid of 2018, at around 44 percent increase over 2017, majorly attributed to clashes among drug cartels over control of drug trafficking routes.

The latest information gains significance in view of the ongoing conflict over Trump Government’s plans to build Mexico wall in a move to curb drug cartels’ encroachment into the country.