The Center for Investigative Journalism (CIJ) Nepal triggered its news report that sent some shock waves across the country.

In its latest investigative report, the department made some shocking revelations about billions of illegal Nepali rupees stashed in Swiss banks by Nepali politicians and businessmen.

Citing its year-long joint investigation made in collaboration with the International Consortium of Investigative Journalists (ICIJ), CIJ found a total of 55 Nepalis to have stashed their black money across foreign destinations in the form of bank deposits and various investments.

By doing so, the accused violated the Nepali law that bars Nepalis from investing abroad.

Moreover, a dozen Nepali business groups were found to have channelized their illegal money from foreign destinations to Nepal in the form of Foreign Direct Investment (FDI).

The latest revelations are the result of a detailed study from 3,000 pages related to Nepal collected from around 28,000,000 pages of key findings by other internationally-renowned investigative sources such as Swiss Leaks, Offshore Leaks, Panama Papers and Paradise Papers. 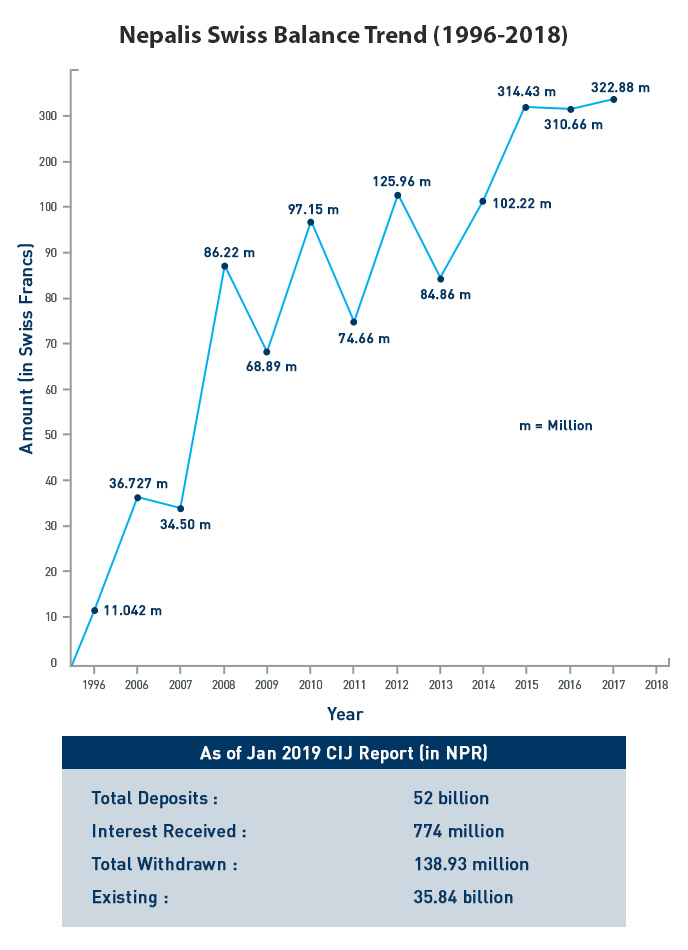 Among those who stashed their money in Swiss Bank, Minu Shah Chhibber was found as the highest amount holder, of around NPR 2.6 billion.

However, the document has reportedly failed to prove the deposited amount’s link with illegal means of collection.

The list also has Ajeya Raj Sumargi (Chairman of Muktishree Group of Companies), Birendra Mahato (a former lawmaker and central committee member of the Sanghiya Samajbadi Forum-Nepal) and Businessman Upendra Mahato and his offshore company partner Niraj Govinda Shrestha, among others in the list.

Nepal Congress member and tourism entrepreneur Rajendra Bajgain was also one of the key accused found to have invested abroad and set up three different companies in three different countries in Hong Kong, British Virgin Islands and the United Kingdom.

Besides top businessmen, politicians, the report also includes the names of less-known investors including entrepreneurs, doctors, professors, traders, hotel & tourism businessmen, among others.

From Illegal Funds to FDI

In a move to converting the black money to white, the accused adopted money laundering practice and brought their illegal funds to Nepal in the form of Foreign Direct Investment (FDI).

A dozen business groups have reportedly done this to save their black money.

The report found that more than 60 percent of the FDI share equalling NPR 82,655,700,000 in Nepal is coming from ‘tax haven’ nations, with the British Virgin Islands and the surrounding nations alone having NPR 62,779,700,000 share of the total amount.

According to the report, around 45 percent of FDI that came to Nepal in the last two decades was from the British Virgin Islands.

The investigation also found that FDI statistics shown by different government authorities are contradicting what the Nepal Central Bank is showing.

For instance, the Department of Industries is showing an approved FDI worth NPR 282.91 billion, with NPR 66.9 billion from ‘tax haven’ countries alone.

Whereas, the central bank statistics show NPR 82.65 billion in place of NPR 66.99 billion, raising doubts over the unauthorized FDI worth NPR 15.75 billion.

It’s surprising that the Government of Nepal has FDI approvals to 17 ‘tax haven’ countries!

Overall, the report found two key violations of the Nepal Legal Provisions, which include:

“According to the Act Restricting Investment Abroad, 1964, Nepalis investing abroad may even be jailed. The Act applies to “all citizens of Nepal whether they reside within or outside Nepal and to corporate bodies established within Nepal,” says Nepal Legal Provision.

The law bars Nepalis from investing in foreign securities, a partnership of a foreign firm, foreign bank account, real estate situated abroad, or any other type of cash or kind.

“If any person does any act in violation of this Act or any notice, order or direction issued under this Act, the person shall be liable to the punishment of fine equal to the amount in question or imprisonment for a term not exceeding six months or both,” says the Act.

Foreign citizens are using Nepali citizenship to park money abroad, says ICIJ, citing its findings in the report that found three Indian businesspersons showing Biratnagar address as a proof of address for their transactions.

Surprisingly, some of the accused have also evaded tax payments.

So, its high time that the Nepal Government acts seriously on the irregularities reported and take necessary measures to bring back the stashed amounts for local development.