Nepal’s ace sportspersons Sandeep Lamichhane and Sabitra Bhandari are nominated for the People’s Choice award category in the Annual Pulsar Sports Awards to be held in Kathmandu on June 02, 2019.

Badminton player Prince Dahal, bodybuilder Maheshwar Maharjan and Volleyball player Reshma Bhandari were the other players shortlisted for the prestigious award to be awarded on July 02, 2019 in Kathmandu.

19-year old Lamichhane was chosen for the People’s Choice award for his noteworthy cricket journey through last year. He caught global attention with his nomination and performance in the Indian Premier League 2018.

Besides, he also held a record for taking 24 wickets in the ICC World Cup T2o Asia Regional Qualifier.

Footballer Bhandari is one of the most important members of Nepal’s Women National Team and was instrumental in taking Nepal to the 2020 Olympic Football Qualifier match’s second round. She was also declared ‘Best Forward’ and Highest Scorer in the Women’s National League.

NSJF President Durga Nath Subedi said that the players were nominated on the basis of their popularity and achievements in the previous year.

The winner will receive a Pulsar Motorbike. 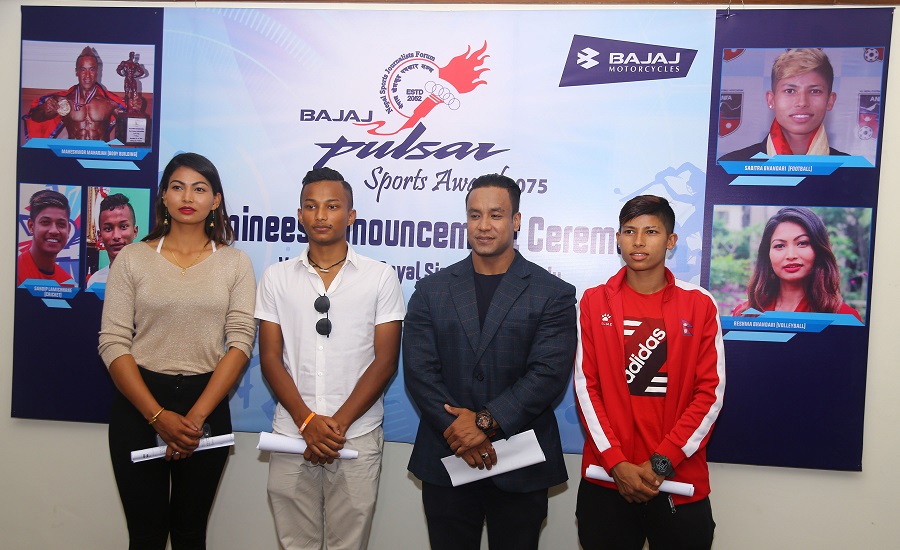 The People’s Choice award winner will be selected through points awarded by national sports associations and NSJF members, Facebook likes and SMS voting.

The annual sports award honors male, female players and coaches of the year, besides presenting the People’s Choice Award. The International Sports Journalist Award category has been added to this year’s Annual Pulsar Sports Awards

Nepali Sansar wishes all the nominees luck for the upcoming award.