Sadly for Nepal, its dreams of bringing home the SAFF U-15 Men’s Championship Trophy will remain unfulfilled again this year.

India started its 7-goal record with a shot from Maheson Singh Tongbram in the 15th minute of the fate-defining match.

This was followed by another two goals from Aman Deep in the 42nd minute and Sibajit Singh Leimapokpam in the stoppage time of the match’s first half.

Taking the game further for India, team player Sidarth registered his first goal in the 52nd minute, which was followed by Himanshu Jangra’s goal in the 65th minute. By the end of one hour, India had registered five goals.

India’s Sidarth stole the thunder in the remainder of the match with a brace, two goals in the 76th and 80th minute. With these two victory-leading goals for Team India, he also registered for himself a hattrick  for being the. 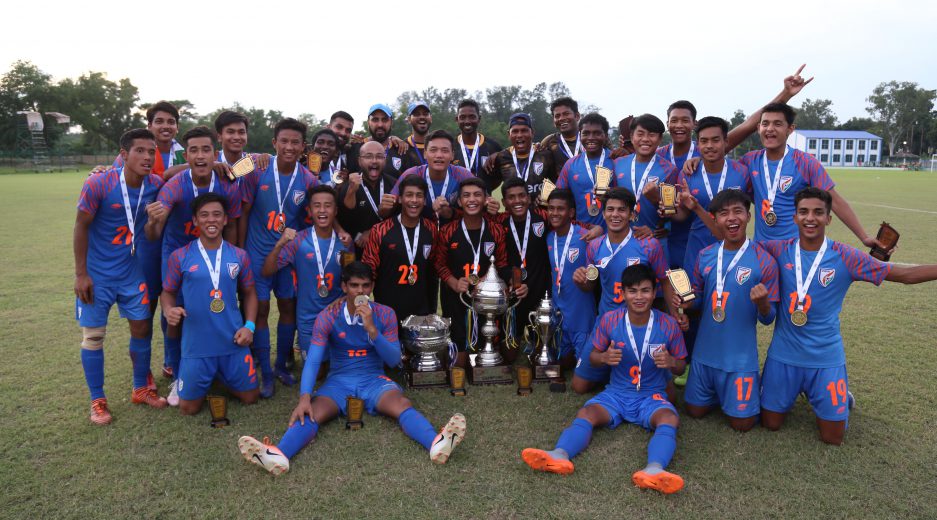 India remained unconquered throughout the series with 28 goals to its credit. The fierce Indian U-15 team didn’t concede any goals in five matches of the tournament, including the finale.

Nepal remained second to best, despite a successful campaign against opponent teams other than India. Nepal scored a total of 11 goals in three matches of the league stage played against, Sri Lanka, Bhutan and Bangladesh.

With this victory, India is automatically qualified for the AFC U-16 Championship 2020 Qualifiers, which will be held between September 18-22, 2019. India will be playing alongside Bahrain, Turkmenistan and Uzbekistan under Group B.