112 medal winners were rewarded with Rs 1.92 million for their achievements at national and international tournaments in the previous fiscal year
News
Sports 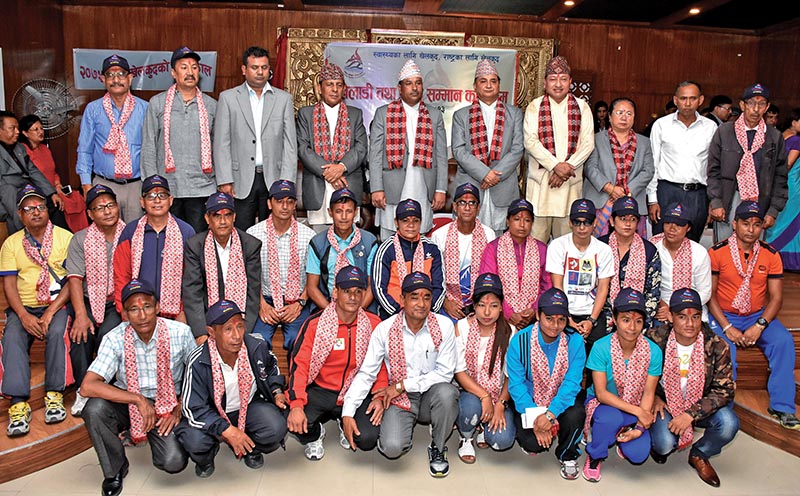 Saluting and honoring the achievements of  Nepal’s ex-Olympians, Nepal National Sports Council (NSC) awarded the lifetime allowance to Olympian athletes in a felicitation program on July 29, 2018.

On the occasion, NSC introduced the lifetime allowance of Rs 3000 for July-August period to all the 80 Olympians who participated since Nepal’s debut with the 1964 Tokyo Olympic Games.

112 medal winners were rewarded with Rs 1.92 million for their achievements at national and international tournaments in the previous fiscal year.

Additionally, the ‘best players’ of the NSC Championship were rewarded with cash prizes. 58 players, two each from 29 sports disciplines were presented with Rs 15,000 each.

Four Taekwondo players who had been best players in Kyorugi and Poomsae respectively were rewarded with Rs 7500.

The Nepal Youth and Sports Ministry also used this occasion to felicitate five athletes and two journalists who won international championships under its Sports Awards and Felicitation Work Procedures.

Congratulations to all the athletes, journalists, ministers and all the other persons who were honored during the reward program.

We hope that NSC and other sports bodies continue to motivate and encourage its senior and young sportspersons initiatives.