After an exceptional performance, the team fell short of 28 points and found its place next to Japan missing a ‘gold medal’
News
Sports 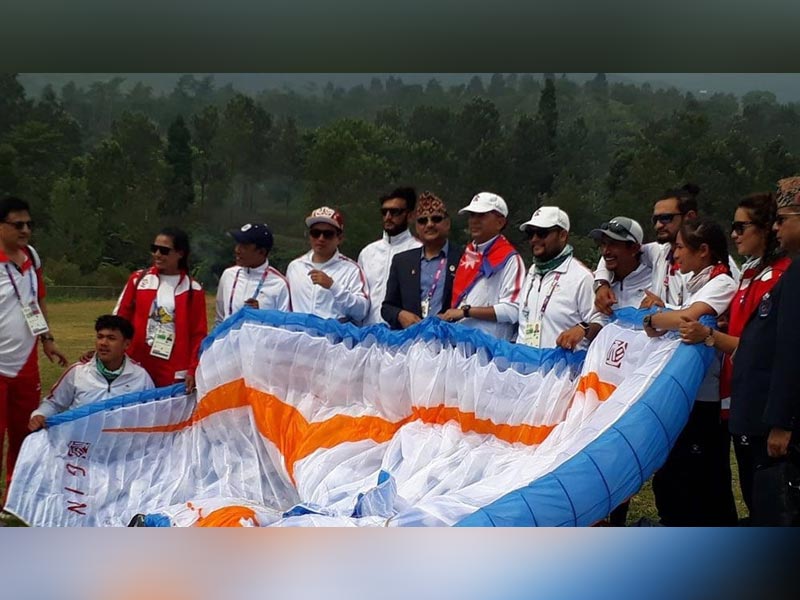 Paragliding came as a savior for Nepal showing some positive results for the country’s relentless efforts to win a medal in the Asian Games 2018.

After more than a week-long struggle across various sports of the ASIAD 2018, Nepal finally scored a biggie in the cross-country paragliding competition held at the Gunung Mas Puncak in West Java, Indonesia.

Nepali paragliding men’s team performed at their best to finally bring a ‘silver medal’ for the country.

As the authorities cut down the race duration from 25 km-12.5 km, Nepali team had to undergo a tough competition in the rush hour of the paragliding race that was badly hit by weather conditions.

After an exceptional performance, the team fell short of 28 points and found its place next to Japan missing a ‘gold medal’.

Meanwhile, the Japanese team earned 2057 points in the today’s round taking their count to 11,391 points to win the event.

The Nepali team drew wide appreciation for bringing the country back to fame in the international arena after a 20-year-long wait since Sarita Rajbhandari got a ‘silver’ in Taekwondo in 1998.

“This is the biggest achievement for us. This win and the medal are for all the Nepali people,” says buoyant Coach Yogesh Bhattarai.

Nepali skipper Bimal Adhikari lauded the team at their success and expressed hope the country would win more medals in the upcoming competitions.

With this victory, Nepal has so far won two ‘silver medals’ in the Asian Games 2018 till date accounting to the all-time medal count of 24.