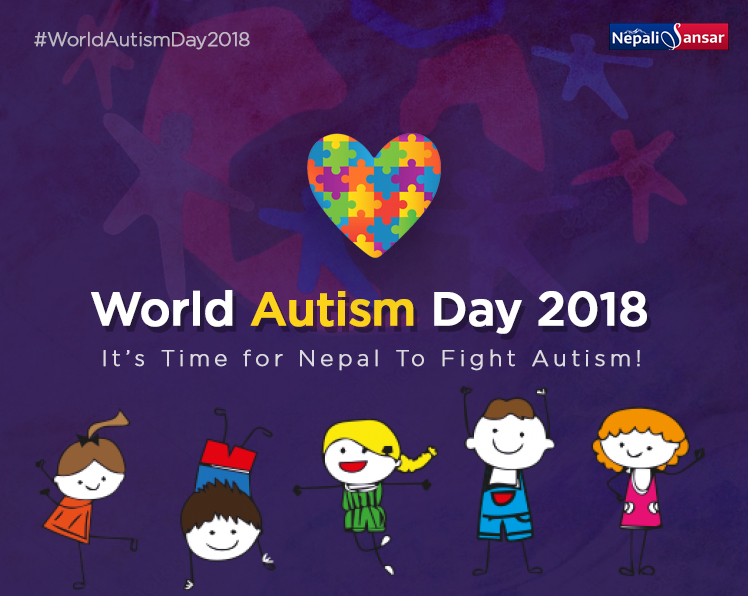 Promoting the need for essential caring of women and children suffering from autism, the 11th edition of the World Autism Awareness Day (WAAD) was observed globally on April 02, 2018.

As its contribution to every global event, Nepal also observed the WAAD 2018 amidst a wide range of activities organized by the locally-renowned charity Autism Care Nepal Society (ACNS).

Marking the day, ACNS organized a Walkathon on April 2, 2018 and also the WAAD and Light it Up Blue (LIUB) program on April 03, 2018, under the theme ‘Empowering Women and Girls with Autism’, at Boudhha Stupa.

Besides, the society is also planning a wide variety of programs all through the month of April 2018 marking the significance of awareness on autism.

“It’s our pleasure to announce that ACNS is organizing different programs throughout this April 2018 to celebrate WAAD and its successful completion of 10th year of service to children with Autism and their families. We would also like to request you to light it up blue at your home, office, buildings, monuments or any premises of yours on April 02, 2018 to raise awareness about autism and support the campaign,” ACNS said in its official release.

Beginning with the orientation program and workshop for volunteers at ACNS on March 25, 2018, the Society planned a list of activities including Autism Workshop at Tribhuvan University Teaching Hospital (TUTH) for MBBS students on March 28, 2018 and a Walkathon on March 31, 2018 followed by Stall exhibition in Teaching Hospital on April 02, 2018 and finally the main event marking the 11th edition of WAAD on April 03, 2018.

Other special activities planned for April 2018 on the account of WAAD 2018 include Autism Sports and Physical Activity in Kathmandu and an interactive session with the government stakeholders, parliamentarians and media in the last week of April 2018.

WAAD is part of United Nations’ resolution to address concerns of children and women facing challenges due to autism disorders.

Towards this end, the UN General Assembly has adopted a new resolution with regard to challenges in the implementation of Convention on the Rights of Persons with Disabilities (CRPD), which points to multiple challenges such as social discrimination faced by women and children with disabilities.

“The 2018 World Autism Awareness Day observance at United Nations Headquarters New York will focus on the importance of empowering women and girls with autism and involving them and their representative organizations in policy and decision making to address these challenges,” UN said in an official release.

Citing various issues such as lack of education, health, employment and socio-economic support to the women, UN pledged saying, “Through dynamic moderated discussions with experts and advocates, the observance will examine the particular challenges that women and girls with autism face in this context.”

UN also laid special focus on other key issues pertaining to human rights among women such as gender bias, family, marriage and parenthood as mentioned in the Sustainable Development Goals (SDGs) adopted by world leaders at UN in 2015.

“On World Autism Awareness Day, let us reaffirm our commitment to promote the full participation of all people with autism, and ensure they have the necessary support to be able to exercise their rights and fundamental freedoms,” said UN Secretary General António Guterres.

According to Nepal’s Centre for Disease Control (CDC) 2017 data, one in every 68 children is facing autism in Nepal.

Overall, Nepal has more than 300,000 people with autism disorders accounting for nearly 1-2 percent of the country’s total population. Surprisingly, the prevalence is five times more in case of boys than girls.

“Every month, about 10 children are diagnosed with autism in the center. It is very difficult to treat children with such disability. They have communication, socialization and sensory issues. That’s why they have difficulty expressing their problems,” says Surendra Bajracharya, Public Health officer at ACNS.

The slow rate of physical and mental development leads to vision and dental issues among such patients.

Need of the Hour

Dr Sunita Amatya, President of ACNS, highlights the need for increased awareness about autism among parents in the present context.

“The government has to support the children suffering from autism by providing training to parents and teachers so that they can handle such children and develop education plans for them,” says Dr. Sunita.

According to Dr. Sunita, special education and treatment including communication, behavioral, art, music and occupation therapies can be a solution for autism patients facing communication issues.