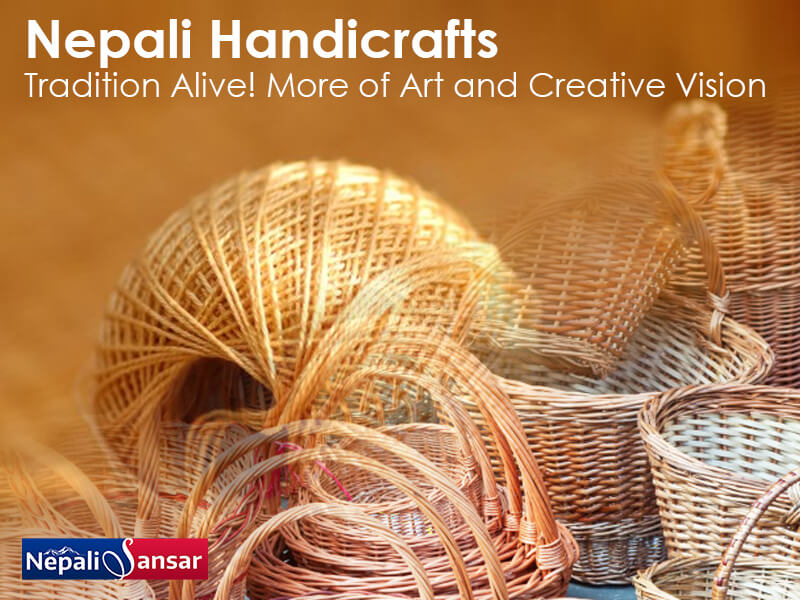 Amidst the boundaries of two great nations stands a land of high mountains, open skies, low-lying clouds, and picturesque views. But, what is it that sets Nepal apart from the rest of the world? What is that one thing that sets a niche for Nepal?

You do not have to think much because life’s most beautiful lies in the daily, ordinary and in the simplest of things that exist around us and so is the case with Nepal!

Nepal finds pride in its rich heritage and culture brought down through years which is represented through art and every piece of handicraft it creates.

Nepali market streets present a wide variety of handicrafts that speak volumes of Nepali artisans’ craftsmanship, thus attracting tourists, art enthusiasts and people who’d love to adorn their homes with these handicrafts. With a wide range of specialization using different elements, Nepalese handicrafts are sure to catch your eyes. 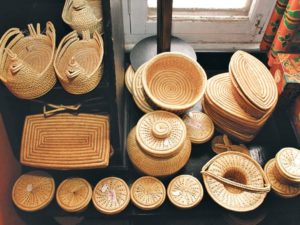 In a world that buys what it gets and has hardly any time to keep up with traditional old times and at the least, stay connected with nature. Nepal makes it a reality as evident in its wide range of eco-friendly products such as fiber-made Allo. Found in the forests of Nepal, the Allo or Sisnu grows at an altitude of 1200 to 3000m. The fibres of this plant are spun to produce jackets, porter’s headbands or straps, fishing nets, ropes, bags, sacks, mats and blankets in the remote villages, especially in Kulung Rai of Nepal. These items are marketed in Kathmandu and are also exported to countries like USA and Japan.

Originated in Bengal, the art of Dhaka weaving is actively practised in the Palpa region of Kathmandu and in Tehrathum, in the eastern hills of the Himalayas. Since many years, Dhaka craftsmen from the eastern and western development regions from Nepal weave pure cotton with specifically created wooden handloom to produce a vibrant variety of saris, shirts, shawls, handkerchiefs and more.

Dhaka clothing is outlined by geometrical print and vibrant coloring. Men from the Chhetri community mostly wear clothing with Dhaka print (Daura Surwal) on their wedding day. The usage of Dhaka has become very significant in recent times, for example, the Dhaka caps or topis are worn for religious ceremonies with regards to births and deaths. The traditional Dhaka Daura Surwal is also donned by the Newars while performing funeral rites.

So, what is Pashmina? Now, we’ve heard this word in a song, in poetry and in some literature too. Well, Pashmina is the fur of the Himalayan goats known as Chyangras. Nepal is famous for Chyangra Pashmina manufacturing and is recognized and registered among the 47 countries with a Trade Mark of Pashminas of Nepal. As per 2000-2001 statistics, Pashmina contributed to 18.4% of the total overseas exports. 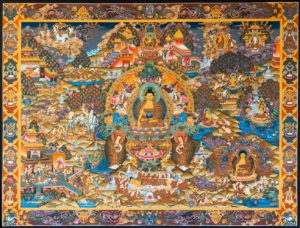 Kathmandu is known as the land of temples and is home to one of the most talented artisans and craftsmen of Nepal.

The natives of Kathmandu, the Newars have strong religious beliefs which are reflected in their paintings called Paubha/Thangka. Paubha is a painting done on cloth using paint that includes gold, lapis-lazuly or mercury-oxide.

The entire history and the lives of deities are depicted on this piece of cloth. This tradition dates to 1365 AD when the Vasudhara Mandala was first discovered.

Kathmandu, Lalitpur, and Bhaktapur are home to the specialists of wood carvings. The Newars, a multi-talented people, have been following the practice since the 12th century. The range of woodwork done by the craftsmen include wooden statues, doors, sculptures and other artistic crafts. The historical carvings in the Kathmandu valley are a visual treat.

Most of the handicraft practices in Nepal have been passed on from generations to generations. But the younger generations are beginning to shift their focus to other kinds of jobs to sustain family life. 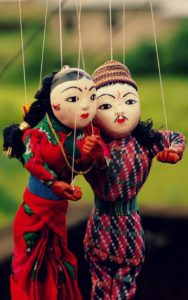 Also, to keep up with the changing trends and bring in innovation, Nepal has put its footsteps into contemporary art and handicraft. Some of its modern art include floor covering, modern painting, patina products, felt crafts, puzzle toys, macramé leather handbags and more.

The Nepali handicrafts industry not only practices and preserves age-old tradition and culture in the country but also is a driving force in eliminating poverty by creating innumerable job opportunities, especially for women. Production associations and groups like the Shree Mahila Utthan Pashmina Udhyog in Kathmandu have a group of about 30 employees out of which 50% are women.

At present, Nepal’s handicrafts are among the largest exported items of the country and more than 20 handicraft products are being exported to about 85 countries across the world.

The largest being the USA which has a hold on about 25% of the handicrafts totally exported. Other major countries include Britain, India, Canada, Germany, Japan, Italy, France, Australia, Netherlands, and China. This creative industry is home to about 916,852 citizens of the country, with the country’s capital Kathmandu, recording an employment rate of 89,548 in this sector. With the rise in the sale of handicrafts being sold online these days, the purchase of Nepali handicrafts is seeing a high.