Four government surveyors have already been scheduled to leave for the Everest peak on April 09, 2019
Government
Special Stories
Tourism
World

Finally, the prestigious project to measure the almighty peak the Mount Everest is set to begin!

In a recent update on April 08, 2019, Nepal has announced that it is sending a team of government-appointed climbers for the project to remeasure the height of the world’s tallest peak.

Four government surveyors have already been scheduled to leave for the Everest peak on April 09, 2019.

Through this project, Nepal aims to answer persistent speculations that the ‘height of the Mount Everest has come down’ after the massive 2015 earthquake’.

“We are sending a team because there were questions regarding the height of Everest after the earthquake,” Susheel Dangol, the expedition’s coordinator from the Survey Department, said in a statement.

The four surveyors are stepping up for the project after a two-year-long detailed study on the methodology to remeasure the peak, which included collecting readings from the ground and getting trained on extreme conditions at the top of the world.

“It will not be easy to work in that terrain, but we are confident our mission will be successful,” says Khim Lal Gautam, the expedition’s leader and chief surveyor, who summited the Everest peak in 2011.

The height of Mount Everest has been a long debate because of the disagreement among geologists and mountaineers, among others over inclusion of snow atop the peak in the total measurement.

The current height of Mount Everest measures 8,848 meters (29,029 feet) as recorded by an Indian survey in 1954. This figure remained till date even though various other teams measured it later.

PM Oli bid a farewell to the team embarking on official survey trip to the Mount Everest peak.

In a special program held in Kathmandu on April 10, 2019, Oli offered Tika and garlands to the expedition team, wishing them a grand success on their journey.

Oli was elated in saying that the survey is Nepal Government’s first-ever attempt to re-measure Everest’s height officially and results add to the government’s data treasure. 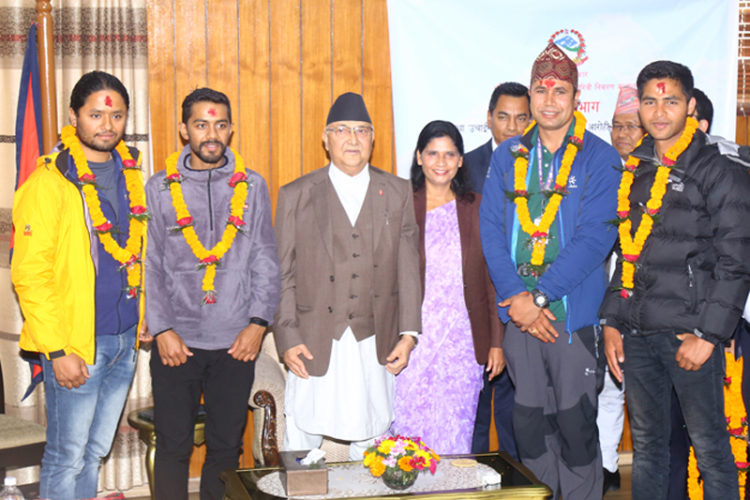 While, a team of Sherpa including Aangpasang Sherpa, Pemangima Sherpa, Chhiring Jangbu Sherpa, Keshab Poudel and Angbu Sherpa will be guiding the team in their expedition.

Following a long-standing debate on whether the 2015 earthquake in Nepal had affected the height of Mount Everest, Nepal launched a ‘national pride’ project in 2017 to remeasure the height of the Everest peak.

The Government of Nepal informed this in a statement on September 15, 2017.

“Nepal has never measured Everest on its own although the world’s highest peak lies in its territory. So, we want to prove to our people that Nepal is capable of measuring Everest,” says Ganesh Prasad Bhatta, Head of Nepali Government’s survey department.

Bhatta informed that a team of Nepali and foreign experts have already begun working on the methodology for implementation of the survey, which is expected to be a two-year process.

Under this process, a Sherpa team will be reaching the peak with necessary measuring equipment, either in April or October 2018, which is usually a favorable period on the peak, a release in 2017 informed.

Other important developments related to Mount Everest over the year period:

A day after informing about the new project, the Government of Nepal on September 16, 2017, made another announcement for foreign tourists visiting Mount Everest.

According to Nima Dorjee Sherpa, the newly-elected Chairman of the Khumbu Pasang Lhamu Rural Municipality in Solukhumbu District, Nepali Constituent Assembly has passed a directive asking the Rural Municipality to levy a Rs 2,000 entry fee on every foreigner visiting the Khumbu region for Mount Everest.

This decision, to be effective from October 1, 2017, was part of its efforts to promote local tourism and decentralize revenue collection to the local bodies of the country, says Nima Dorjee.

The Nepali Government was also asked to restrict other agencies and NGOs such as Nepal Mountaineering Association, Trekking Agencies’ Association of Nepal and Nepal Tourism Board from collecting any entry fee from foreigners visiting the Khumbu region.

To address the health challenges that trekkers usually face on their travel across the Everest camp, a local service provider, Everest Link has launched online health services in the region.

Now, trekkers and mountaineers traveling across the Lukla-Everest Base Camp route can get free online medical services through Wi-Fi facility.

According to Tshering Gyaljen Sherpa, CEO of Everest Link, the services are being provided in collaboration with the two hospitals based in Khumbu and Kathmandu.