World Day Against Child Labor 2018: A Glance at Nepal and Global Scenario

The world nations are observing the World Day Against Child Labor (WDACL) on June 12, 2018.

Marking WDACL 2018 under the theme of ‘Generation Safe and Healthy’, the International Labor Organization (ILO) called on the world nations to ensure safety of young workers and end child labor by 2025.

“About 73 million children are in hazardous work – almost half of the 152 million children aged 5-17 still in child labor. Many suffer lifelong physical and psychological consequences. Their very lives can be at risk,” ILO said in an official release.

“Urgent action is needed to ensure no child under the age of 18 is in hazardous child labor,” says ILO Director-General Guy Ryder.

According to ILO, many of those children under child labor are toiling in mines and fields, factories and homes, exposed to pesticides and other toxic substances, carrying heavy loads or working long hours.

Among the world countries witnessing the child labor menace, Nepal is one country that has some alarming scenario with regard to child in hazardous work.

A Glance at Child Labor in Nepal

Employment has been one major concern for Nepal which is even today impacting thousands of its populace to move abroad for employment and career opportunities.

While this is the case of those who can afford to live abroad, what about those struggling locally? Here is where the concern of child labor arise.

(Source: US Department of Labor)

Many of the working men and women population of Nepal were observed to have engaged their children in some form of child labor to generate required incomes to run the family.

Some of the Nepali sectors known for their prevalence of child labor include agriculture, industry and services, among others.

According to ILO, there is almost no reduction in the number of children aged 5-11 in child labor and the number has in fact gone up.

On the other hand, the United Nations reports that “the returns on the investment in ending child labor are incalculable.” 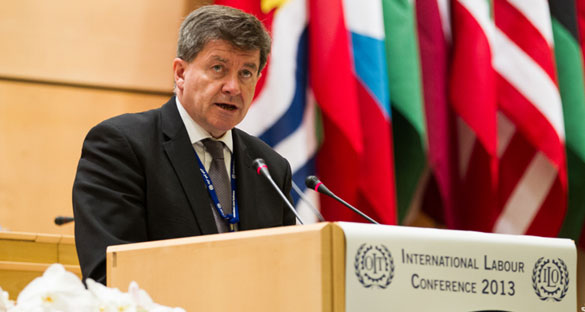 Addressing the world nations at the 107th Session of the International Labor Conference in Geneva on June 8, 2018, Ryder urged the world governments to prioritize special programs against child labor.

Pointing out at economic concerns as the root cause of child labor, he pitched on the need for an immediate attention to unpaid family work in agriculture along with the global supply chains.

In this regard, he also pledged ILO’s all-round support to all the governments in curbing the menace of child labor, globally.

The Geneva conference marked the 20th anniversary of the #GlobalMarchAgainstChildLabor that first began in June 1998 when hundreds of marchers including children gathered at the stage of the International Labor Conference. This eventually resulted in the adoption of the ILO Convention No. 182 on ‘Eliminating the Worst Forms of Child Labor’ in 1999.

According to ILO estimates, all forms of child labor will not be eradicated by 2025 and the world will still see 121 million children in forced labor situations despite all the planned measures

In this regard, the world labor body says, “We must move much faster if we are to honor our commitment to ending child labor in all its forms by 2025.”