The morning of June 18, 2018 kicked off the lottery for some important positions and tenures of Nepal’s National Assembly (NA) ministers. The results of the draw were received among good cheer.

Out of the 59 NA members, while 56 were elected from seven provinces, eight got shortlisted from each province followed by three recommendations nominated by the President.

Results of the Draw

Women Members of the National Assembly

The tenure of Nepal National Assembly’s women members has also been determined through a lottery system.

According to the draw conducted at the Federal Parliament in New Baneshwor, Bina Pokharel, Dil Kumar Rawal, Pramila Kumari, Deepa Gurung, Nanda Chhapai, Anita Devkota and Indu Kadariya have been elected for a six-year tenure.

Murari Mahat, Joint Secretary at the Parliament Secretariat, refers to Article 86 (3) of the Nepali constitution, which recommends: 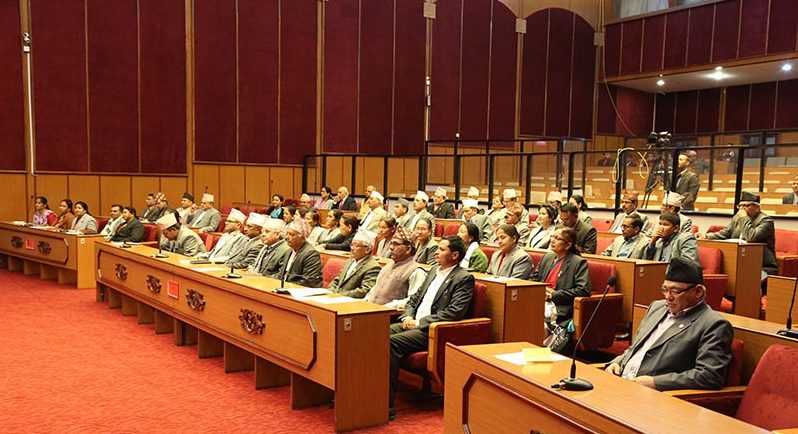 The first parliament formed according to the new constitution determines the tenure of NA members in a way that one-third members provide service for six years, one-third for four years and one-third members fulfill a two-year tenure. Members for the six and four-year terms include 20 members, while two-year term members account for 19 members.

Addressing the media on June 17, 2018, Rajendra Phuyal, Secretary of the National Assembly Secretariat, said the Parliament Secretariat will have boxes for each cluster and members who represent the cluster will have to draw lots from the same cluster.

He further added that there will be different boxes for each cluster, Dalits, differently-abled, women, and people from the minority communities besides separate box for 21 members; three of which from each province, elected from the open category.