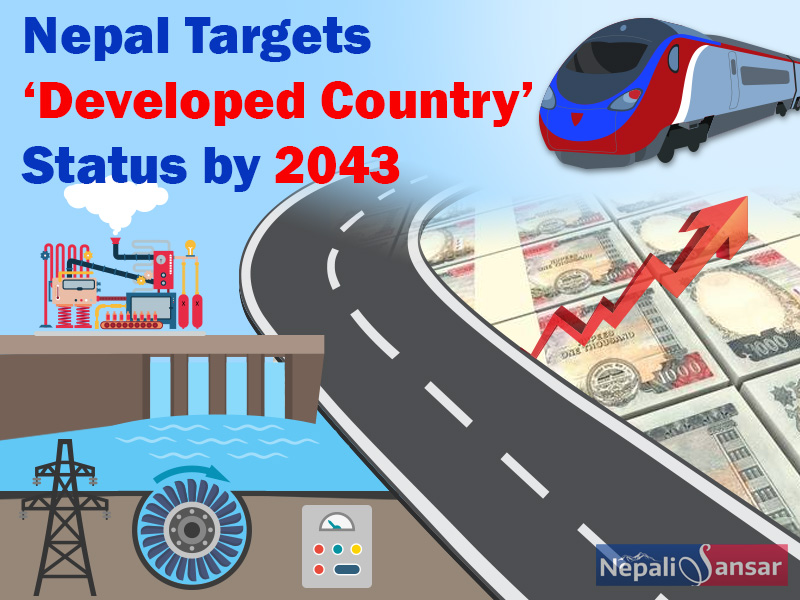 While its already evident that Nepal is working towards the ‘middle-income’ status by 2030, the new update tells us that the country is simultaneously gearing up further to also achieve the ‘developed country’ status.

Towards this end, Nepal Government is currently preparing a 25-year plan called ‘Long Term Vision of Nepal’ to transform the country into a ‘developed nation’ by 2043.

“The vision paper is being drafted to give the country a clear direction in achieving the long-term goal of prosperity for the people after the country gained political stability with the elections last year. The main goal of the vision paper is to achieve minimum level of development to be recognized as a developed country by 2043,” said NPC Vice-Chairman Pushpa Raj Kadel.

Besides the Long Term Vision, NPC is also working on a new five-year periodic plan for implementation from the coming fiscal.

While Nepal’s per capital income stands at USD 1,012 currently, the vision aims to double it in the next five years.

Under the vision, the country aims to zero-down poverty level, achieve per capita income at the level of industrial economies and ensure employment for nearly 40 percent of population belonging to lower income category.

Besides, the vision also aims to:

“We plan to publish the vision paper along with the five-year plan before the end of the current fiscal year,” informed Kadel.

In line with development agenda, the government has also paid high regard to infrastructure and other aspects of local development in the Federal Budget.