Nepal for ensuring proper implementation of the Right to Vote during the election campaigning process, says Zeljana Zovko, Chief Observer of EU-EOM
News 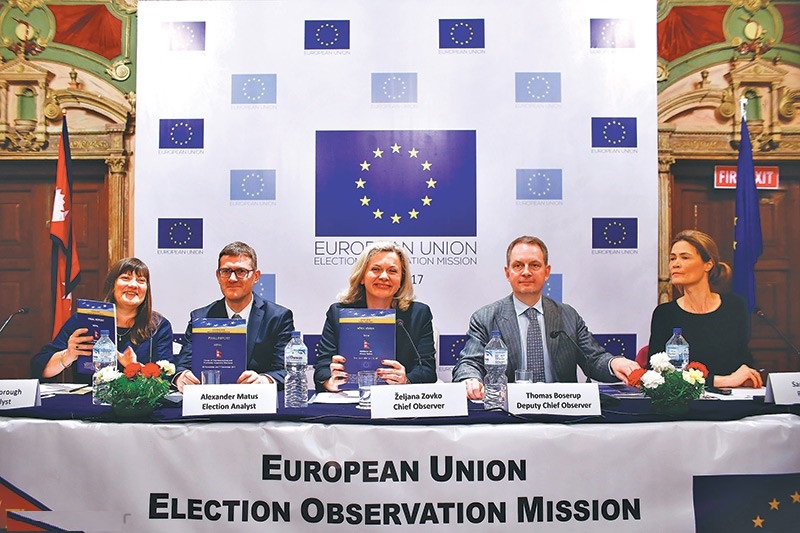 In the Final Election Observation Report, EU-EOM termed the recently-concluded Nepali elections as ‘historic’ and a milestone activity.

In her comments, Zeljana Zovko, Chief Observer of EU-EOM appreciated the way elections were conducted and said these polls form a key milestone in the implementation of the new Nepali Constitution promulgated in 2015.

Zovko said the legal framework formed a strong basis for the successful conduction of elections.

She further lauded Nepal for ensuring proper implementation of the Right to Vote during the election campaigning process.

The EU-EOM final report included a total of 29 recommendations to the Government of Nepal regarding enforcement of laws to control vote-buying, review of First-Past-The-Post (FTFP) constituency boundaries for effective exercising of Right of Vote and increased transparency from the Election Commission of Nepal.

While the report highlighted’ that ‘the Election Commission of Nepal failed to publish critical information on voter turnout across polling centers and invalid votes along with lack of procedural weaknesses,’ the Election Commissioner Sudhir Shah responded saying, “We also can’t expect standards as high as those applicable in the UK and the US in Nepal at a time when the EC was forced to hold so many elections in less than a year.”

EU also urged for the removal of certain well-represented communities from the inclusion quota under the Proportional Representation (PR) electoral system.

“Review the impact of the quota system on the ethnic composition of the House of Representatives and Provincial Assemblies and ensure the measures of affirmative action apply only to groups that are the subjects of negative discrimination,” noted the report.

Upon the request from the Government of Nepal, EU had deployed around 100 election observers representing 28 EU member states along with Switzerland and Norway, as the special election observation team to monitor the two phases, Phase-I and Phase-II, of Nepal legislative polls for House of Representatives and Assemblies on November 24 and December 07, 2017.

EU had spent an estimated EUR 3.5 million for the mission and had appointed around 38 Long Term Observers (LTOs) across different parts of Nepal to monitor the election preparations and related logistics issues.

“It is a great honor for me to lead the EU Election Observation Mission to Nepal. I’m very committed to accompany Nepal in this important phase of its democratic process,” Zovko stated earlier after the announcement of his team’s help to Nepal elections.