Forecast represents a continued trend reversal, but substantially higher than the average rate of 4.3% in the last 10 years
Business
News 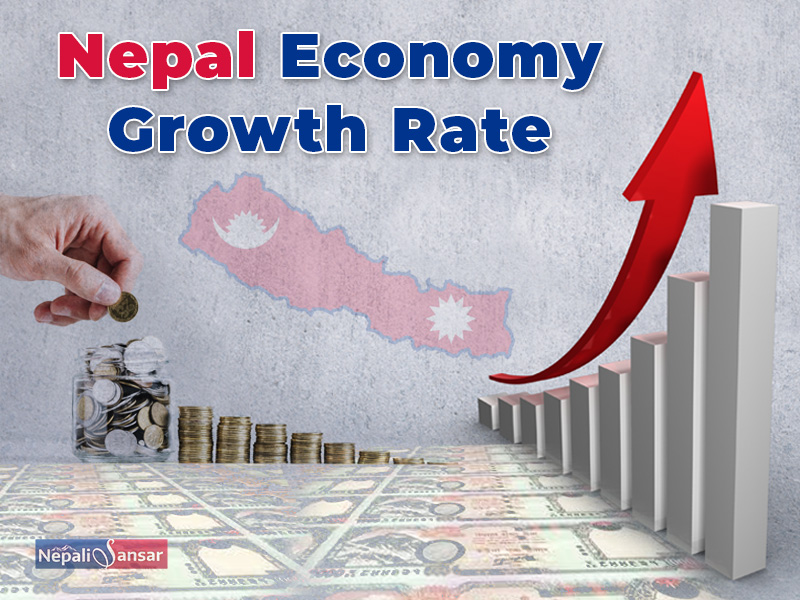 Nepali economy is poised to grow at a healthy rate in FY 2018-19 supported by expectations of political stability and implementation of mega infrastructure projects, said the Asian Development Bank (ADB) in its latest release.

In its new Macroeconomic Update, ADB noted that Nepal will see a 5.5 percent economic growth rate (at basic prices) in the ongoing current fiscal that started in mid-July 2018.

According to the release, the country’s agriculture sector will more likely grow from 2.8% in FY 2018 to 3.5% in FY 2019, backed by bumper harvest as a result of good monsoon.

Whereas, the industry sector is going to see a 7.2% growth in FY 2019 supported by the improved power supply across the country.

On the other side, the services sector is expected to witness a 6.1% growth in FY 2019 driven by the wholesale & retail trade expansion, travel & tourism subsectors and financial intermediation, informed ADB.

“The growth forecast represents a continued trend reversal but is substantially higher than the average rate of 4.3% in the last 10 years (FY 2009–FY 2018). Growth will be supported by expectations of greater political stability following the 2017 elections, normal monsoon, and efforts to accelerate implementation of mega infrastructure projects,” says Sharad Bhandari, ADB Principal Economist for Nepal.

Inflation, Revenue & Federalism Among Challenges
According to ADB, the growth is going to be healthy, but slow, majorly because of limited capacity at sub-national levels and challenges hindering smooth implementation of federalism.

“Some of the major issues affecting the smooth implementation of fiscal federalism are slow progress in requisite legislation and deployment of staff, the need for further clarification of mandates and responsibilities of the three tiers of government, and inconsistencies in revenue mobilization regarding fees and taxes at local levels,” the release noted.

On the other side, inflation is also most likely to grow from 4.2 percent in FY 2018 to 6.0% by
FY 2019, partially due to supposed higher inflation in India, higher government expenditure under the new federal structure and modest rise in oil prices.

When it comes to revenue collection, it exceeded the Fiscal Budget target in FY 2018 at NPR 731.4 billion (24.3 percent of GDP). However, the fiscal deficit widened to 6.7 percent of GDP because of high government spending compared to previous year.

“While capital expenditures increased by 28.0% in FY2018 with the execution rate at 79.7%, the hasty nature of spending has continued undermining the quality of capital projects,” said the release.

The current account deficit in FY 2018 stands at 8.2% of GDP, significantly higher than that 0.4% of GDP in the previous year. Whereas, the trade deficit in FY 2018 was majorly due to large import of capital goods and construction material.

“While remittance has shown a healthy growth, a substantial rise in the near future is unlikely to offset the rise in the trade deficit, leading to further widening of the current account gap,” ADB informed.

Will have to see how the government deals with the situation to sustain the expected economic growth rate along with overall sector-wise development.

Nepal Economy at a Glance

Looking at the Nepali economy’s path over the period, the country’s GDP Annual Growth Rate averaged 4.48 percent from 1993 until 2017.

Here are some notable statistics pertaining to the country’s economic growth over the period:

By GDP in revenue, Nepali economy has registered a lowest-ever GDP was USD 0.50 billion and the highest recorded till date stands at USD 24.57 billion. 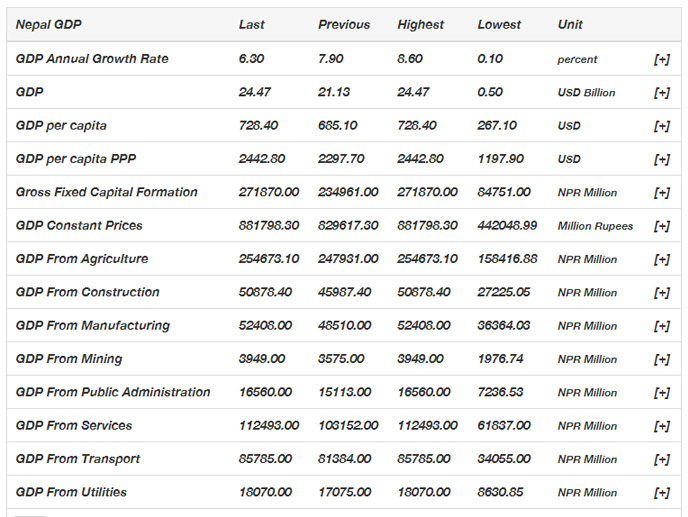 By economic indicators under the Asian Development Outlook (ADO) 2018 update, the country’s GDP growth rate grew from 0.2 percent in 2016 to 7.4 percent in 2017. And then saw a sudden down to 4.9 percent in 2018 and went a percent ahead further until now. 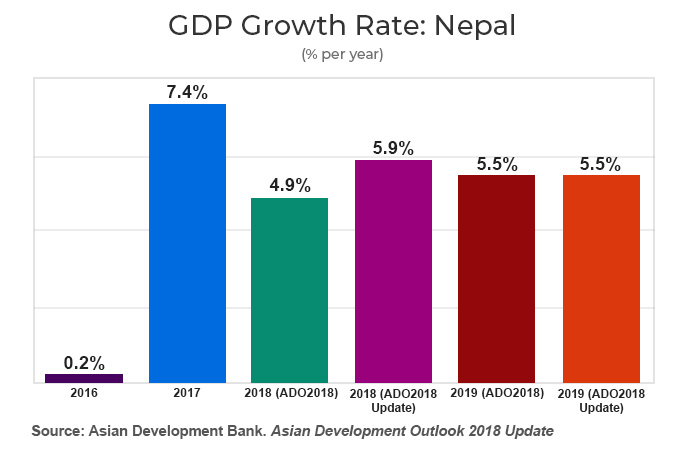 3) By Comparison with South Asian Nations

Nepal is one of the least developed countries and has been heavily reliant on foreign aid for local development.

The Himalayan nation is an agriculture-driven economy, which has almost 70 percent of the population employed in it. Agriculture alone accounts for 33 percent of Nepal’s GDP.

Next to agriculture is ‘Tourism’ that the country boasts of as its high-potential sector. Nepal tourism has been steadily growing and recently crossed 1 million mark, turning as one of the key important sources of revenue. 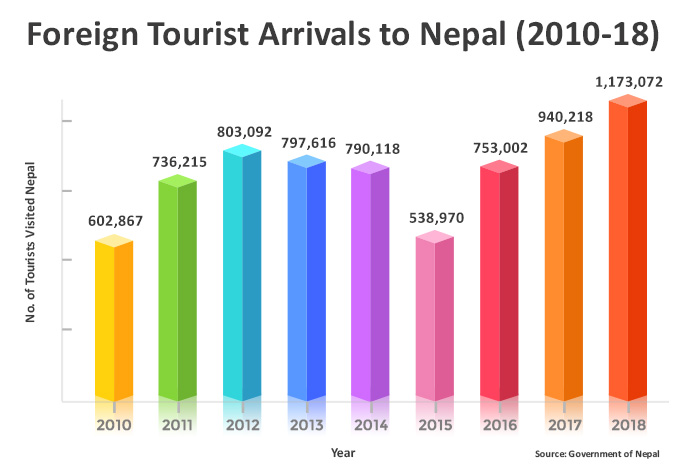 Energy is another key potential area for Nepal since centuries, owing to its rich natural resource availability. The country has been working seriously to harness its hydroelectric power, either by local policies alongside welcoming foreign investment.

There are many sectors that speak Nepal’s potential and were left untapped. If tapped, they can really contribute to the overall growth of the Nepali economy.

With this potential in place, the Nepalese economy managed to witness a steady growing in recent years. However, lack of effective governmental institutions social instability were some concerns.

Under the aegis of Oli Government, Nepal is poised to see some significant growth both locally and globally.