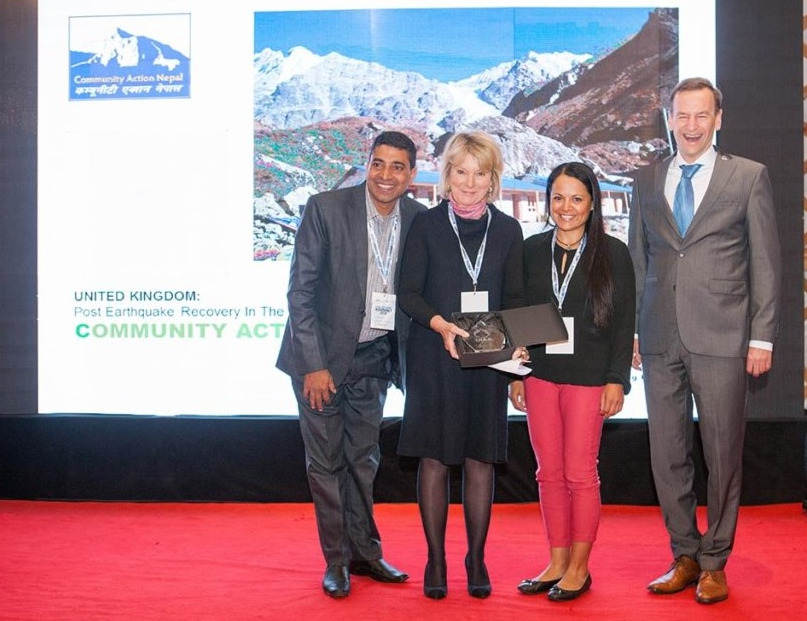 In a glorious moment for Community Action Nepal (CAN), the charitable association won the Annual UIAA Mountain Protection Award at the 2018 UIAA General Assembly in Ulaanbaatar, Mongolia.

“Assigning this year’s winner was a difficult task. The score results among the top-ranking projects were very close. Nevertheless, CAN and its work in post-earthquake recovery in Nepal, has been instrumental in helping to support the rebuilding efforts of local communities who themselves provide so much for mountaineers in their pursuits in the mountains. It is great to see this solidarity,” explained Dr Carolina Adler, President, UIAA Mountain Protection Commission.

Former UIAA Management Committee member Doug Scott CBE was elated at the association’s achievement and praised it for its efforts.

“Receiving this is just reward for the trust that some 5,000 donors have placed in CAN, the unstinting help of more than a hundred UK volunteers, our dedicated and hard-working UK and Nepal staff and the whole-hearted, hands-on support from our trustees, both here in the UK and in Nepal, over many years,” said Scott.

About CAN
CAN was setup by Scott, a legendary mountaineer who wanted to repay the mountain people of Nepal for helping him climb 14 Himalayan peaks.

It was a significant record created by the 1975 British Everest SW Face Expedition at the time.

CAN strives to help protect mountain communities and works on the principles of sustainability and environment protection.

However, the 2015 earthquake wiped out all of CAN’s 20 year-hardwork which deprived many people of their shelter and dislocated them from their land.

But the determined association was quick to recover from the shock and refocus its attention on reconstruction activity. These activities included rebuilding assets including gompas, health posts, porter shelters and schools besides education provision, health care and supporting livelihood.

The reconstructed infrastructure is built to resist any future natural calamities.

After 2015 KTK-Belt & 2017 Mount Everest Biogas Project, CAN is the third winner association which works closely with Nepali mountain communities.

“We are very pleased to see a broad range of projects nominated for the MPA this year, in particular it is great to see a genuine interest and action, on behalf of the mountaineering community, on issues of development and support for the livelihoods of communities that live in the mountains and with whom we have direct interaction as part of our own visits to the mountains,” Adler added.