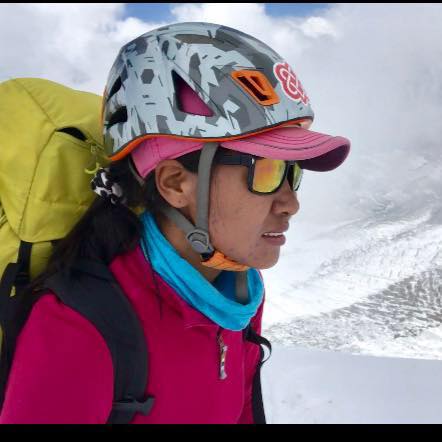 Often described as a PhD in mountaineering, the course run by the Swiss-based International Federation of Mountain Guides (IFMG) has so far been awarded to 6000 people across the globe and to just 50 Nepali men.

Dawa completed the course in January 2018.

Belonging to the Sherpa ethnic group famed for mountain guiding, Dawa had no doubts about her choice of profession right from the beginning. “I knew what I wanted to do. My passion was to be outdoors, to climb. And my family did not discourage me,” says Sherpa.

Expeditions to Everest and Other Peaks

After that, she has never looked back. Subsequently, she became part of various successful expeditions to the summits of other mountains before climbing the world’s highest peak Mount Everest in 2012.

Upon her return from the Everest expedition, Dawa registered to become a certified mountain guide. She then scaled one of the world’s toughest climbs, the K2 peak in Pakistan, as part of the first Nepali women’s team in 2014.

Dawa’s attempt to climb the Kangchenjunga, the world’s third highest peak, was curtailed by inclement weather in 2017.

The 27-year-old Dawa is looking forward to guiding an expedition to Denali, North America’s highest peak, in June 2018. She will also continue her work as an instructor at a couple of climbing schools in Nepal.

“She was already moving forward to become one of the top women mountaineers not just in Nepal but in the world, but this certificate will open many new opportunities for her,” says Sunar Bahadur Gurung, President of the Nepal National Mountain Guides Association.

Dawa Yangzum Sherpa’s success is undoubtedly an inspiration to all other girls and the entire women community of Nepal and the world in making their dreams come true and progress in life.