But, it’s only Amrit Gurung who has been with Nepathya since its inception.

Keeping aside his role as a Founder and Manager of Nepathya, Amrit Gurung is the only member who never left the band and is currently the leader & lead vocalist of the band. The other band members include Dhurba Lama (joined Nepathya in 2001 as a drummer), Suraj Kumar Thapa (joined as a keyboardist in 2003), Subin Shakya (joined as a bass guitarist in 2004) and Niraj Gurung.

Nepathya’s path reflects Gurung’s life. “Being in Nepathya is like being part of a serious journey. Anyone who deviates from team spirit and artistic commitment finds it hard to stay with the team,” says Gurung.

From its first-ever performance in the United States in Summer 2012 to becoming the first Nepali music band to perform in the United Kingdom on August 3, 2013 to, Nepathya received huge applause for its stage shows across the globe, especially in UK, USA, Australia, Israel, Germany, Finland and India.

The Wembley Arena Concert in UK was the biggest ever performance from Nepathya, where the band successfully entertained 8000 Wembley crowd, which mostly included Nepalese living in UK and Europe.

“It is like a dream come true to play at Wembley,” said Amrit Gurung on the sidelines of the event.

Nepathya is famous for blending folk melodies with western-influenced rock music. The band is also well-known for its contemporary tunes that have links with the indigenous Nepali songs sung using regional dialects of rural Nepal.

Even though Nepathya started with folk pop, it went on to play contemporary rock and folk rock as well. Nepathya’s albums mostly speak about love, nature, patriotism, current issues and peace.

Some of the popular albums of Nepathya include:

As per the latest update, the Nepathya team is embarking on another two-day musical tour to the United States for their fifth concert in the country at The Bomb Factory in Dallas, Texas, on June 9, 2018. Nepathya’s first tour to US took place in 2004 where they formed at Phoenix and Washington DC, and continued for further concerts over the years at different places such as Los Angeles, Atlanta, New York and San Francisco.

Other Interests of Gurung

Apart from Nepathya, Gurung is also involved into various other activities. Social and peace initiative taken by Gurung in Nepal, in the past decade, received wide response from all sections of the Nepali society.

Along with Nepathya, Gurung also heads the music wing under nepa-laya and is also active in research on Nepali folk music, for which, he travels extensively through the country.

When I am not on concert tours, I travel across Nepal on foot. From the villages of the far-west to the east, from the Himals to the Tarai, wherever I go, I find food and shelter through my Nepali language, said Gurung in an instance. 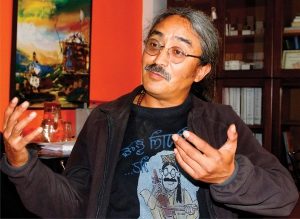 Amrit Gurung struggled hard for livelihood in his early life. His hobbies, painting and photography, earned him bread in the past. “I did my study through the income of my paintings and earned my bread by photographing weddings,” says Gurung.

However, Gurung left his painting hobby as he found a passionate musician in him. “I lost my habit of playing with colors and instead started to play with music. I neither had a music teacher nor any type of formal training. I had always loved music,” says Gurung.

Eventually, his passion drove him to come up with Nepathya, along with the other three members.

Huge following and celebrity status did not change the lifestyle of Amrit Gurung. According to Gurung, simplicity & positive attitude makes a better living.

“It wouldn’t be strange for someone to see me riding down the highway in a truck or sitting on the lap of mountain reading a book. I have never seen myself as a star nor do I try to be. I enjoy both the sad & happy parts of my life and look at every moment as a positive one. This way of thinking has made my life rich. My life is beautiful the way it is,” says Gurung.

Talking about his successful career, Amrit Gurung says, “I went on singing for my own satisfaction and I got satisfaction by what music gave me.”