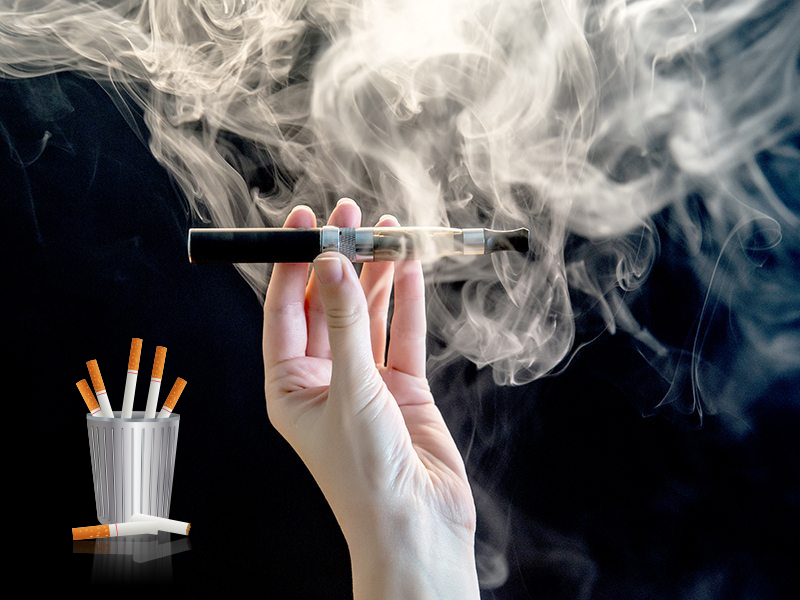 A luxury that came as an alternative to conventional cigarette smoking is the electronic cigarette or e-cigarette.

These electronic devices, also called as vaporizers, have penetrated many world markets as a substitute to regular cigarette giving a similar smoking feel, but not exactly.

E-cigarettes smoking or Vaping has become a trend among many, but many are yet to understand their ill-effects and severe damage to health.

Vaporizer is basically an electronic device powered by a battery and promoted as an alternative to regular cigarettes to overcome the smoking addiction.

Like a few other countries, Vaping trend has reportedly caught up Nepal too!

Vaping- Nepal’s Case
Controlling smoking addiction aside, vaping itself has turned into a new addiction among many Nepalis.

A Nepali engineer Pathak’s mother Kalpana Dhungana introduced vaping to her son to get him rid of the severe smoking habit. But that did not work out.

“I wanted to quit smoking so I switched to vaping, but contrary to our expectations, the outcome was different. There was no improvement. There was no positive result that encouraged me to stop smoking, therefore I stopped vaping,” says Pathak.

Besides, the alternative gave some additional loss to Pathak.

“It did more harm to me. I was spending around Rs 10,000 per month at the risk of my health. We should look for other alternatives than vaping to quit smoking because it clearly does not help,” Pathak adds.

Same was the case with many Nepali youngsters who considered vaping as an alternative to conventional smoking. Substitution aside, the resultant was more of high spending for buying liquid, coils and other accessories & add-ons required for such devices.

The vaping trend entered Nepali market around two years ago and was promoted as a must-needed gadget to control smoking habit or as a healthier alternative.

Eventually, the trend went on to rise and even dedicated vaping lounges started popping up in the Capital. Social media added to this trend opening ways for crazy ideas like ‘vaping contests’, among other ways.

Smart designs of such devices looking similar to pen drives gave rise to the trend among youth, who started carrying them to colleges too.

While most of such products and related accessories come as imports from China, some vendors also get them as special orders from the USA and Malaysian markets.

“The price range of a full toolkit can range somewhere between Rs 4,500-45,000,” says Prajwol Basnet, one of the partners of Vape Nepal, the country’s leading sellers of vape kits and liquids.

“Vape users are on the rise because of its anti-smoking quality. People of all age-groups are our clients and have benefited from these products. These products are lab tested. Tobacco products have tar that is not present in the liquids. As far as I know, vaping has no adverse effect on health,” says Basnet, the seller of Vapes in Nepal.

They say that vaping can cause serious effects than conventional smoking.

A recently-published research by the American Journal of Physiology-Lung Cellular cited Greek scientists reporting that even short-term vaping can cause serious lung inflammation.

A group of researchers who conducted vaping trials on rats confirmed the above fact, raising serious suspicion on their long-term usage.

Currently, there is very less awareness in Nepal about the vaping trend and its harmful effects.

“I cannot comment on its health impacts as this is the first time I am hearing about vaping,” says Bhaktapur Cancer Hospital Medical Oncologist Dr Kamal Raj Soti.

If the country’s renowned cancer hospital doctor is saying that, we can gauge the level of awareness that the common public in Nepal has about vaping and its effects.

So, its high time that the Nepal Government and related stakeholders such as medical professionals start responding to the growing harmful trend and keep the public informed!