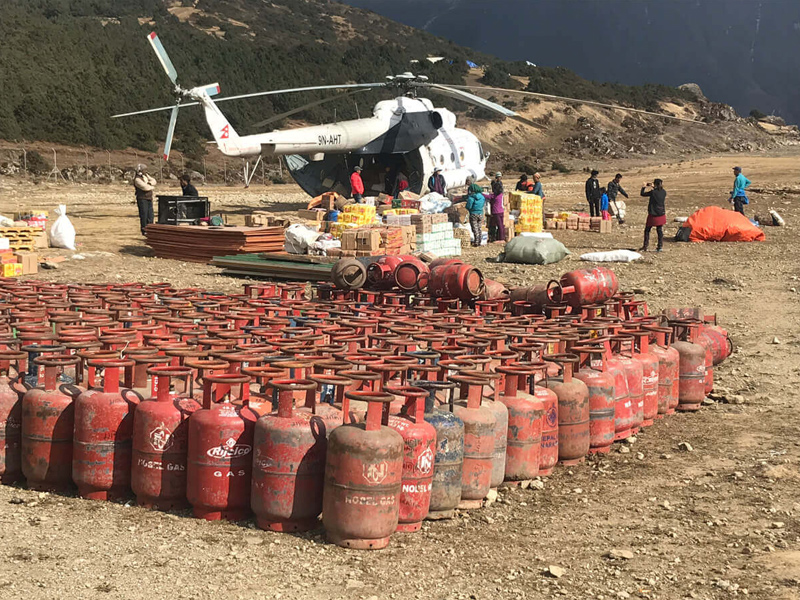 Nepal has reported a 4-fold rise in LPG imports in the last 10 years. This has drastically reduced the pressure on forests and indoor air pollution resulting in many people’s illness.

However, the expansion of LPG in Nepal has its own downsides. The revenue earned on each cylinder (NPR 1,375) is collected by the Nepal Oil Corporation (NoC) plus a sizeable sum goes to the Nepal Government as tax. Furthermore, some of the money is earned by India in terms of import earnings, contributing to Nepal’s already widening trade deficit.

India buys gas from Gulf countries where Nepali migrants make up for a remarkable size of the Gulf workforce. Indirectly, their income sent in the form of remittance is given back to the countries they work for.

Not just the monetary losses, but Nepal is also guilty of contributing to the greenhouse gases.

Besides this, Nepal is also spending a considerable amount of money on the delivery of these cylinders across the country.

It’s time to consider the potential of energy. Nepal produces its own fair share of clean hydroelectricity. The Khulekhani reservoir reached its maximum level, following rains this year in Nepal. This is where Nepal should take its opportunity and cut away from its dependence on LPG for cooking. Instead of LPG stoves, Nepalis should adopt the usage of electric rice cookers and induction stoves at least during the daytime.

Cooking at least one meal of rice in electric cookers, pre-heating water using solar water heaters can save Nepal a lot of money spent on imports of LPG and energy.

The Nepal Electrical Authority (NEA) can also support this cause by introducing time-of-the-day metering. The cost of the hydropower should vary during the day, peak hours in the evening and night. This will serve as an incentive to cook at certain hours of the day.

It’s time that Nepal also considers using the energy it generates rather than exporting it until it has more than enough for itself.

Soon differential tariff and real-time meters will become defining parameters. Extensive number of hydropower projects and speed of progress towards project completion are synonymous of hydropower’s reliability in terms of cost and quality.

If we only dedicate our time to using electricity for cooking during the day, it can save billions of Nepal expenditure on imports.