Taking ahead the Nepal-Japan pact on labor cooperation, the two countries signed a Memorandum of Cooperation (MoC) for the inflow of Nepali workers into Japan.

According to the Nepal-Japan MoC, the Nepal Department of Foreign Employment (DoFE) will operate a separate unit to facilitate the recruitment of Nepal workers under Specified Skill Workers (SSW) status including call for applicants, language & skills tests and deployment of the successful applicants to Japan.

As per the MoLESS press release, the joint committee (representatives from both sides) has been established to ensure proper MoC implementation and improve recruitment, employment and repatriation of Nepali SSW workers through necessary corrective measures.

Japan is recruiting foreign nationals for 14 sectors including agriculture, automobile repair and maintenance and construction industry among others.

Specifications of the Nepal-Japan Labor Agreement 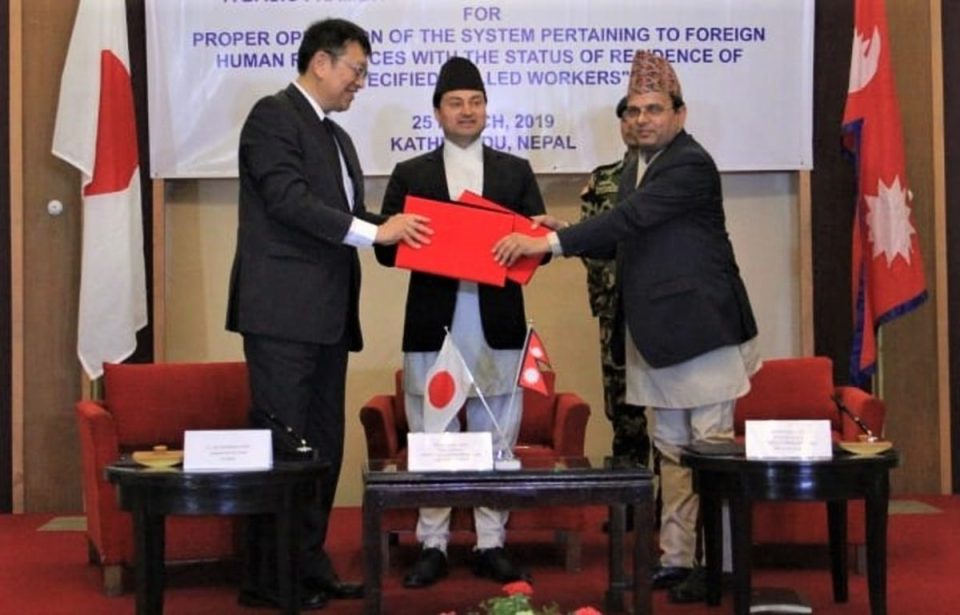 SSW 1: Workers will be engaged in jobs requiring a considerable amount of knowledge or experience and will be allowed to stay for a maximum period of five years

SSW 2: Workers will be employed in work needing expert level skills and there can be an extension of stay.

MoLESS states that workers under SSW 2 category will be able to take family members along.

“Equality of treatment between Nepali and Japanese workers will also be ensured in their terms of employment and in accordance with the Japanese laws. Remuneration received by Nepali workers with the status of residence of SSW will be equal to or more than the amount of Japanese national would receive for the same work,” reads the MoLESS statement.

Every worker will be assisted and guided by an external support plan which includes an orientation to daily life in Japan, support to learn Japanese language and consultation & complaints concerning labor and living.

A Nepali migrant aspiring to work in Japan must possess N4-level language competency and skills.

N4-level of language competence is the ability to read and understand passages on daily topics written in basic vocabulary and kanji.

It is also specifies the ability to read and comprehend conversations encountered in daily life and generally follow their contents.

The new deal paves for strengthened ties between the two countries.