The third session of the Federal Parliament began with Speaker Krishna Bahadur Mahara’s welcome note, followed by a letter from the Office of the President about the session call.

This session, also known as the ‘bill session’ discusses drafts of bills and their endorsements. It seeks to amend or replace existing laws that are not in accordance with the Nepali Constitution.

As part of the proceedings, Nepal political parties’ leaders and members have already started giving their suggestions.

Deuba slammed the incumbent government for its approach towards certain issues.

Starting with the controversial Nirmala Panta case, he said that the Government failed to maintain peace and security and alleged that it was responsible for protecting those involved in the victim’s rape and murder.

“The police are torturing innocent people in an attempt to extract confessions in the Nirmala case,” he added.

He also listed the transitional justice process, civil servants rearrangement and purchase of two wide-body aircraft, among other government negligence.

Commenting on the civil service scenario Deuba said, “The government is trying to scare civil servants. It should have tried to enact a new civil service act through the Parliament without taking the ordinance route”.

“We are not going to let those who embezzled government money go scot-free,” he added while calling on the government’s approach to the purchase of the wide-body aircraft. 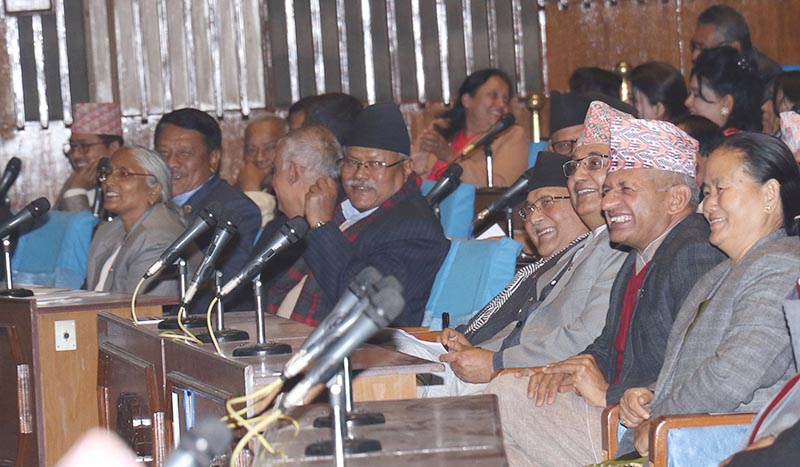 “The government should pursue a balanced foreign policy,” Mahato said while talking of government approach in dealing with international affairs, which he alleges has sparked friction in the international community.

Dahal, however, maintained a neutral stance when he said that the opposition and ruling parties should work together to enact new laws and implement the new constitution.

“We cannot even imagine authoritarianism. We won’t abandon the democratic system because we fought for democratic values,” he added.