The Upper Trishuli 3A Hydropower Project built by a Chinese construction and engineering company in Nepal saw a major breakthrough recently.

After construction started in 2000, the first of the project’s two turbines completed a 72-hour trial operation on Monday after injecting 30 megawatts of power into the Nepali grid on May 16, 2019.

The station, constructed by China Gezhouba Group, is equipped with two vertical shaft hydro-generator sets, with 30 megawatts for each, and is located in Rasuwa, a suburban community about 95 kilometers from Kathmandu. It is the largest hydropower plant in Nepal that went into operation in 2019.

The Nepal Electricity Authority built the project with a concessional loan of USD 114.7 million from the Export-Import Bank of China. The interest rate on the loan is 1.75 percent, and the repayment period is 20 years starting from the date of commercial operation, according to a report by Nepali newspaper Money.

“In terms of distribution, electricity from the Trishuli corridor has made our system more reliable and robust,” said Kulman Ghising, managing director of the Nepal Electricity Authority.

“Also, we can now save water in the Kulekhani reservoir and use it to avert intermittent supply issues in other regions. The load centre is near Kathmandu, and the Upper Trishuli plant will produce around 45 megawatts, even during the winter. This will help us to maintain the demand-supply equilibrium in Kathmandu,” he was quoted as saying by Money.

Ghising believes that if the plant runs smoothly, it will be able to meet 8 percent of the country’s power demand and help to reduce its dependence on India for energy, especially during the winter, local media said.

The electricity generated by the plant will mainly serve people in Kathmandu, Nepal’s capital, to further ease electricity shortages in the region, said Wang Ziyang, the project manager from China Gezhouba Group. 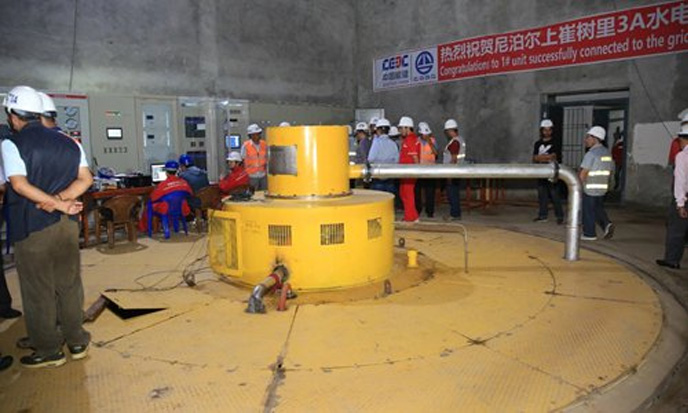 The project was originally due for completion in 2014. But a serious earthquake in 2015 damaged the dam road and brought a series of obstacles for Chinese construction workers, including mudslides, shortages of supplies and poor road traffic. The recovery work was not started until 2017.

At the peak of the construction, around 600 Nepalese and more than 200 Chinese workers worked on the site together, many of whom became close friends during that time.

Krishna Shrestha is a mechanic who worked on the project for seven years. In order to communicate better with his Chinese colleagues and further improve his skills, Krishna bought himself textbooks and audio-visual materials to learn Chinese and practiced every day during his commute, according to China Radio International.

The second generator set of the Upper Trishuli 3A Hydropower Station will be connected to the grid at the end of June this year.