Nepal Prime Minister KP Oli returned to Nepal on January 26, 2019, after a successful representation of the Himalayan nation at the 49th World Economic Forum (WEF) on January 25, 2019.

Speaking to media at the Tribhuvan International Airport, Oli said that his visit to Davos, Switzerland was successful in updating the international community and various country representatives about Nepal’s: 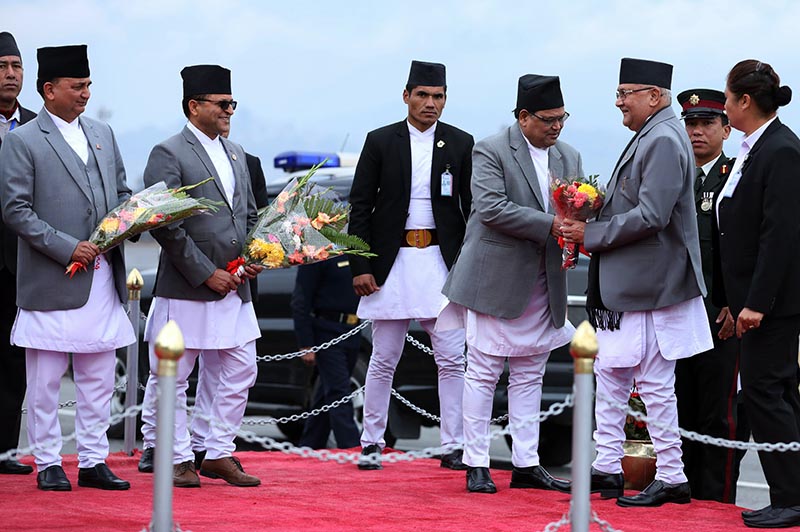 During his participation at the full session of WEF and his engagement in two separate discussions on the theme – Strategic Outlook on South Asia and Determining the Future of Democracy, Oli shared Nepal’s outlook on:

“I expressed opinion on consolidation of democracy, ensuring the people’s rights on political, economic and social sectors, protection and respect to the sovereign people, and on the inevitability of the press and its responsibility,” Oli said.

Expanding his stance on Protection of Democracy & Press Freedom, Oli said that he also spoke about issues regarding other people’s rights in a democracy, the responsibility of the press to refrain from publishing wrong information to individuals, families and society and various aspects of press freedom enjoyed by Nepali press.

PM Oli added that he held informal interactions with heads of states and governments of various countries, economic experts, CEOs of multinational companies and other eminent at the 49th WEF.

In all these meetings, Oli emphasized the government’s role in materializing Nepal’s goal of ‘Prosperous Nepal, Happy Nepali’.

Before his arrival in Nepal, the Nepali Prime Minister also visited Doha, where he was welcomed by Nepal Ambassador to Qatar Dr. Ramesh Prasad Koirala.