‘Summer Love’ All Set to Recreate Magic in February 2019

Wouldn’t it be great if stories you read came to life? Well, not every story you read can come to life but it can surely become a movie!

Yes, that’s right. The next Nepali movie from the Romance genre is an adaption of Subin Bhattarai’s debut novel Summer Love.

Although previous adaptions of popular Nepali novel-turned-movies failed to impress the Nepali audience, Summer Love looks like ‘the one’ that will break this ‘jinx’.

Director Muskan Bhandari plans to do with the film what the novel did in publishing.

“I read Summer Love when it came out and was immensely impressed. Because the novel itself is ‘filmy’, I had wanted to make a film out of it. So I was overjoyed when the chance finally came around,” said Bhandari.

Unlike a few novel-turned-movies, the film remains true to the book and most of the plot remains the same. However, there’s a twist at the end! Well, you’ll have to wait to watch.

Bhandari says, because the film stays true to most of the novel and retains its artistic merit, it will be a breakthrough in the category of novel-turned-movies.

The movie Summer Love will tentatively release on February 8, 2019 through Nightingale Entertainment. 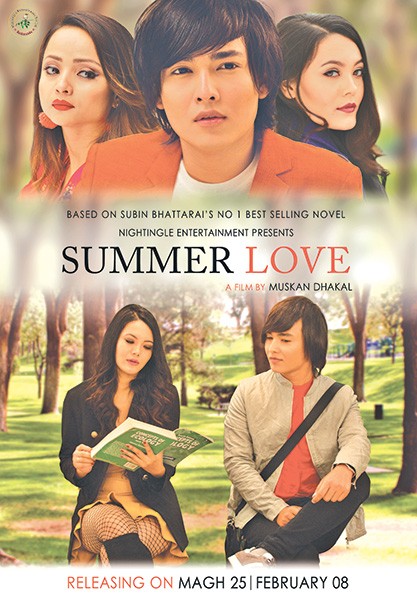 The book talks about a regular love story where a boy meets a girl, they fall in love and then things take a sad turn.

But what sets this novel apart is it’s simple narrative and plain prose.

It was well-received by readers and became a huge hit in September 2012, when it first released.