Sharma’s new music video was trending as No. 10 on the popular music video channel
Entertainment
News 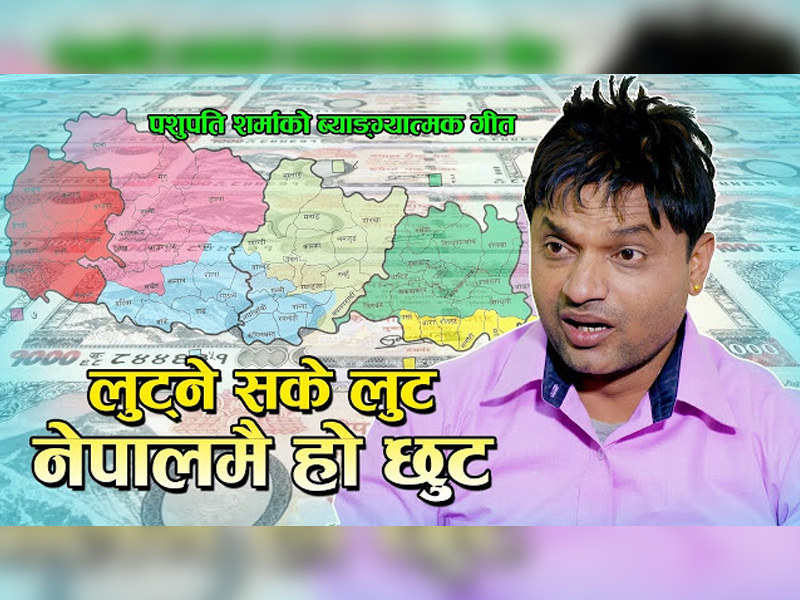 Protests were rife across Nepal when popular singer Pashupathi Sharma was asked to take down his satirical composition on corruption in the country.

Lootna Sake Loot Kancha was taken down from YouTube 48 hours after it was uploaded by Sharma, following threats from Nepal Communist Party’s youth wing.

The NCP youth wing Youth Federation Nepal issued a statement on its Facebook page on February 16, 2019 asking Sharma to “correct his mistakes”. It accused the singer of defaming the incumbent government by aligning with the main opposition Nepali Congress.

The group threatened that it would be forced to take action that would affect his career if he retained the song.

Sharma left a statement on YouTube saying, while he cannot make alterations to the words of the song, he would not surrender his rights as a Nepali citizen to voice his opinion against corruption and those involved in it.

When reports regarding the song’s withdrawal began to appear, a multitude of people started showing their support for the singer through public discourse.

Many Nepalis outside the country, especially those in USA reproduced the song to show their protest against the ban.

As protest continued in full swing, Nepal Yuba Sangh Senior Vice-Chairman Kiran Poudel issued a general appeal to all for boycotting Sharma, claiming that he insulted the country’s President and tried to project Communist rule as ‘the rule of Yamaraj (the God of Death)‘.

The people feel the pinch in their hearts, as the President enjoys ride in a helicopter, reads one of the lines in the song.

Sharma’s new music video was trending as No. 10 on the popular music video channel. The video was  receiving positive response from listeners on social media and other platforms.

Supporters including the National Folk and Duet Song Academy Nepal urged Sharma to re-upload the song.

The Academy released a press statement on February 18, 2019 stating that citizens should be able to criticize government and public servants through songs, video, acting, and various other mediums.

Expressing one’s views is a right under the Freedom of Expression and we won’t tolerate the infringement of that freedom,” read the statement.

“We take a strong stand and will not tolerate any actions that infringes the freedom of any artist,” the academy added in its statement.