It was one day before the finals and I was traumatized. As I recall it now, I can’t let go of that incident, says Niti Shah, Second Miss Nepal Runner-up for 2017
Entertainment
News
World 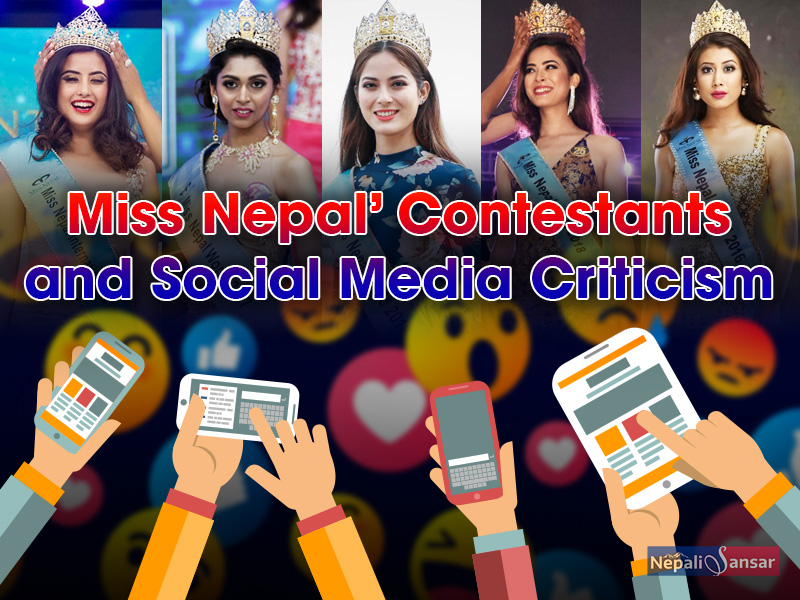 Nepali beauty contestants have been at their best at the world beauty pageants in representing and making their country feel proud.

And, they have always received wide applaud from local and global audience for their charming faces. But, one disappointing aspect continues to haunt them…

That’s #socialmediatrolls and bullying! Yes, you read it right.

Miss Nepal contestants of the Himalayan nation have been facing severe and straight-on-face criticism from their online audience. Unlike previous contestants, Nepal Miss World 2018 face #ShrinkhalaKhatiwada seems to be little lucky and on a safer side of this trend as majority supported her.

And, what’s surprising is that the social media troller did not miss to troll the earlier contestants, taking Shrinkhala’s occasion.

Although missing the Miss World 2018 Title, Shrinkhala became successful in bringing home the Miss Multimedia and Beauty with a Purpose awards.

When Niti Shah, the second Miss Nepal runner-up for 2017, congratulated Shrinkhala on her achievement, Nepali netizens did not wait even for a second to ask Shah as to ‘why she failed to do so the last year?’

Nikita Chandak, the Miss World Nepal 2017, also faced a similar embarrassing situation from social media trollers when she was crowned with the title in 2017. She was badly abused, criticized on her physical appearance, complexion and ethnicity.

Rojina Shrestha is another victim of this disappointing trend. #Onlinetrollers did not hesitate to make bad comments on her physical appearance when she was crowned with the ‘Miss Earth Nepal’ title.

It’s really heartening to read how Rojina felt on these comments!

“Although I haven’t been bullied much compared to Nikita and Niti, I have been receiving criticism for my body since I was crowned. And, it isn’t limited to online. People say it right in front of my face,” says Rojina.

Beyond Fun…It’s a Matter of Serious Concern!
All this started when a known Nepali FB page titled ‘Friday Nepal’ posted a picture of Khatiwada with #MissMultimedia award, alongside morphed images of Chandak, Shah and #MissWorldNepal2016 Asmi Shrestha asking (in Nepali) Khatiwada as ‘how she managed to pull it off’ the awards.

However, the page admins removed the image later expressing their apologies.

“We were merely joking and didn’t give the joke much thought, it turned out to be insensitive and hurtful. They are our #MissNepal who has made our country proud. I feel extremely guilty for this act. Sorry for any aggravation this might have caused to three of them,” said the page admin.

Whatever, once posted online, its visible to everyone and might demotivate the ones subjected to that act.

Similar case happened with Shah in 2017 for her social media post about rural and urban women, which went viral. This drew huge #socialmediaattention! While some understood the essence of it, some criticized badly, leaving her in deep disappointment, all this exactly before her final contest day!

What would be more disappointing than this?
Social media trolling and other forms of illicit acts have left many in deep distress, especially #womencelebrities globally, damaging their reputation and demotivating them. And, Nepal stands no exception to this trend!

There are many such reported cases, especially the young women in the age group of 19-25 years who have just begun coming into limelight in their fresh career.

The trend has hurt many former Miss Nepal contestants in their career start. Many wanted to speak but refrained from doing so! In some cases, criticism continues to bother and traumatize even years after the actual incident.

“It was one day before the finals and I was traumatised. As I recall it now, I can’t let go of that incident. #Cyberbullying needs to be taken seriously. It really does hamper people’s state of mind and can lead to low self-esteem and depression. I couldn’t sleep for so many days. It almost led me to give up everything that I had achieved so far,” says Shah, sharing her bitter experience.

“I report, delete, or ignore most of the posts but sometimes I reply back when I feel it’s necessary but then again, they reply saying we are celebrities and we need to take criticism,” Shah adds.

Chandak is also seriously concerned about this illicit act.

“Beauty pageants are meant to be platforms for women empowerment, to make a woman feel confident about herself. Pitting one against another creates pressure and inferiority. People feel like they have the right to give their opinion in any language they want to. We do appreciate and accept constructive feedback, but bullies need to understand that the person they are writing to is also a human being with emotions,” says Chandak.

What more has to happen? Its high time for the Nepal Government to bring in stringent social media regulations to safeguard the basic rights of its social media users!