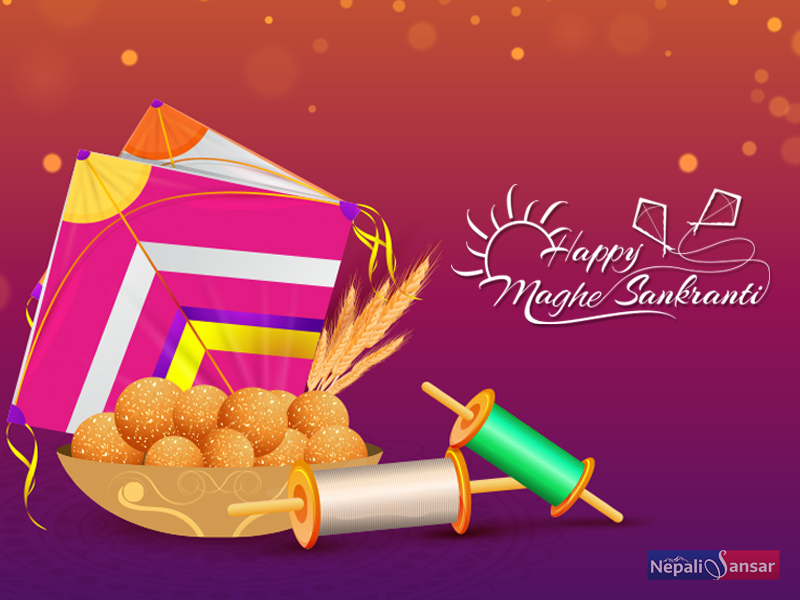 Nepali Hindu community is celebrating the auspicious Maghe Sankranti 2020 with fervor across the country on January 15, 2020.

The celebrations are planned on a grand scale beginning with the traditional #bullfight, as every year. Marking the festival day, the country is going to see exciting bullfighting events across different areas.

The bullfighting event will be seen in Nuwakot and Dhading districts, adjoining the Kathmandu valley, as the major highlight of the #MagheSankranti2020 celebrations in Nepal.

Hundreds of public are going to be seen in Taruka village of Nuwakot district to watch the joyful event.

The local sport has its origin in Taruka village and has been played since some 200 years ago in the 19th century.

Bullfight in Nepal is different from those in other parts of the world! #NepaliBullFight event includes both bulls and oxen, where they will be fighting continuously for nearly an hour period.

Ethnic appearances by the women of Tharu and Magar communities are going to be other highlights of the day. 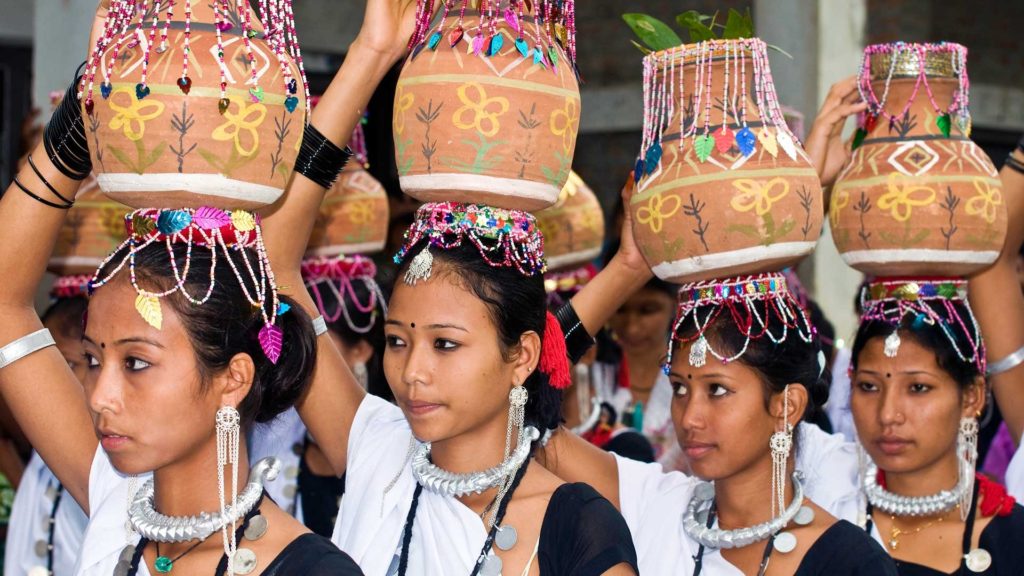 Maghe Sankranti, which falls on the first day of the Nepali month of Magh as per the lunar calendar, marks the transition of Sun into the Hindu zodiac sign called Makara (Capricorn), putting an end to winter and welcoming the other seasons of the year followed by summer.

As per the tradition, Nepali Hindus visit various holy shrines and rivers to observe traditional pujas and Makar Snan (holy river bath) at the confluence of major rivers on this auspicious day. 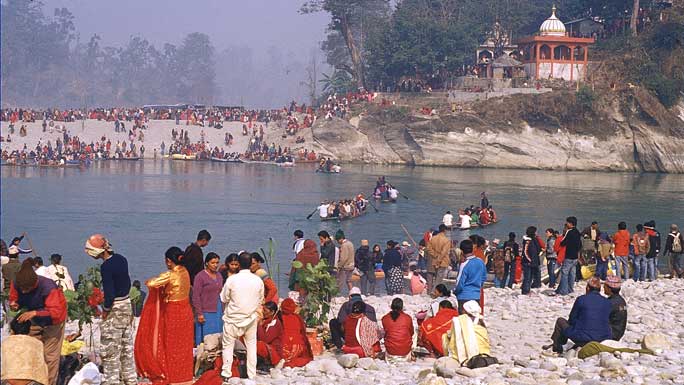 While the confluence of the holy Kali Gandaki and Trishuli rivers in Devghat hold great significance, devotees also take holy dips at various other rivers such as Dolalghat, Devghat, Ridi, Triveni and Baraha Kshetra, among others across the country.

Culture and Tradition for Wellbeing 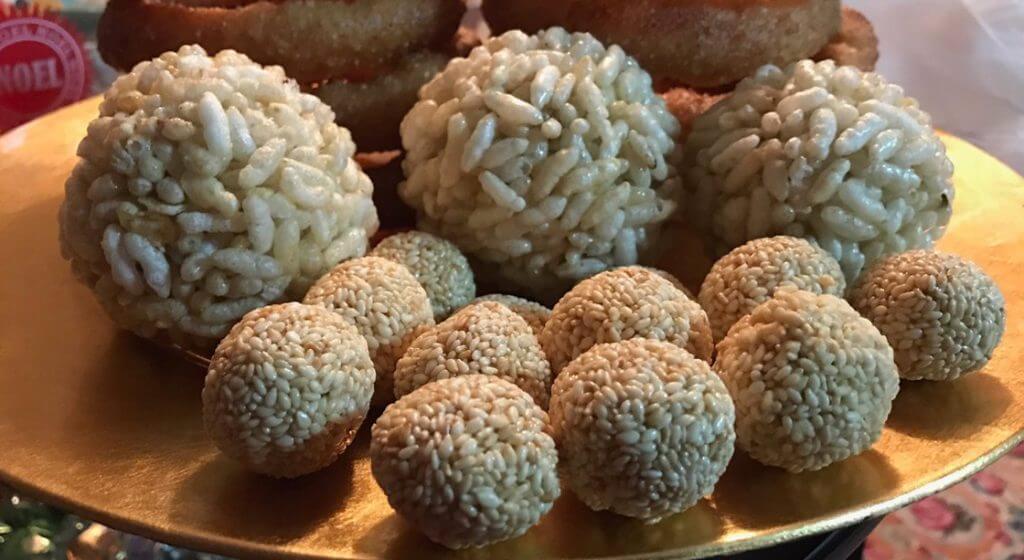 Meanwhile, the Newar Community also celebrates the festival as Ghyo Chaku Sanlhu with delicious dishes like ghee, chaku and remembering their beloved and departed souls.

As per the tradition, the elders apply a little amount of oil to the younger ones who then proceed for holy dip in sacred rivers. It is believed that sharing and eating ghee and chaku, vegetables and yam and sesame seed candy on the festival day adds to a healthy life. 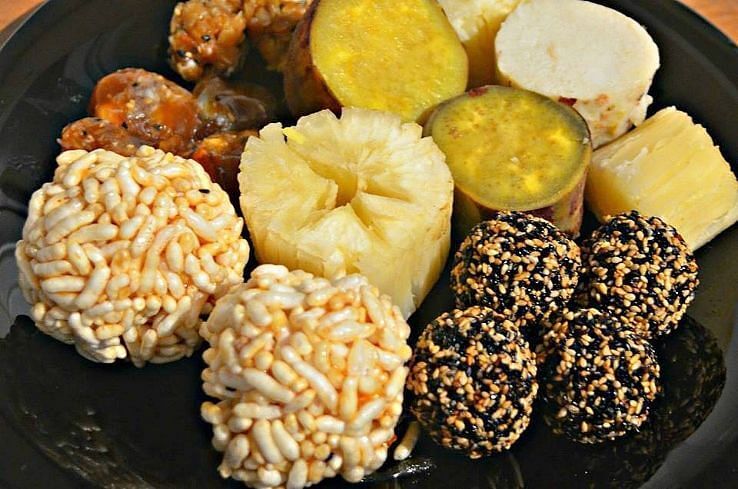 Another special delicious item, a mixture of black gram and rice with hot spices and ghee, called Khichadi is also served on this auspicious festival day. On the occasion, national leaders President Bidya Devi Bhandari and Prime Minister KP Sharma Oli extended their best wishes to the global Nepali community. 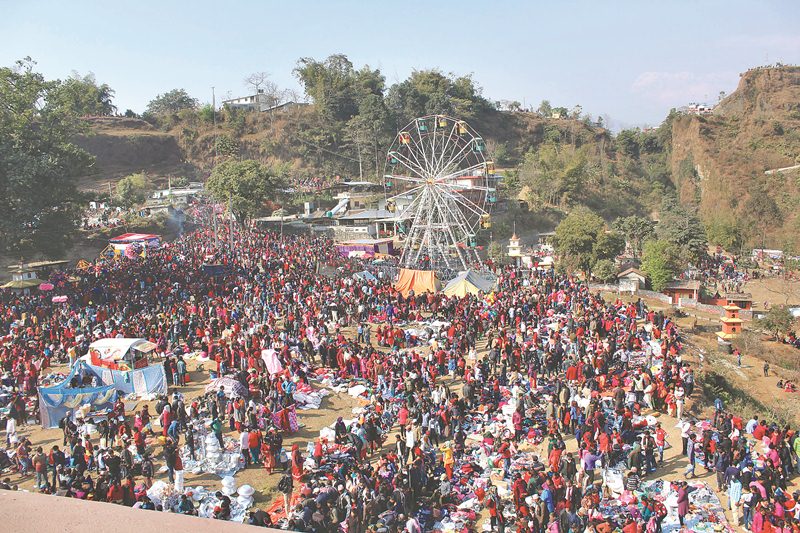 In 2019, a three-day-long fair was held in Gulmi at the pilgrimage site of Ridi of Ruru area at a place, a
tri-junction of Gulmi, Syangja and Palpa districts.

Meanwhile, another big religious fair was also celebrated in Devghat of Chitwan district with thousands of participants gathering at Devghat Dham for taking holy dip and observing the festival rituals.

Tharu community people also gathered at Tundikhel on a larger scale to mark the festival celebrations. Dressed in cultural attire, the community performed various cultural and religious dance shows at the event. 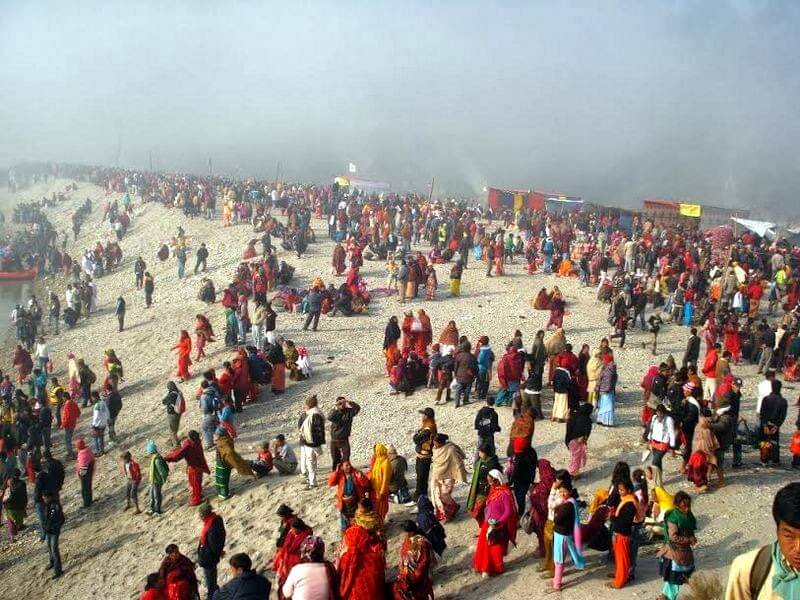 While Magh is also celebrated as the feast of molasses, Nepal’s mountainous district Nuwakot looks at it in a different way.

Marking the start of the Magh, the country observes the annual bullfighting event, a traditional animal sport that dates back to more than 225 years.

“This is the tradition which we (farmers) have continued for years. We have been herding the bulls and the government has been giving allowance to buy the tractors. However, we are not getting any sort of help or aid despite preserving the tradition for long,” says Bhoj Bahadur Bhandari, a participant of this traditional bull sport.

This annual bull-taming festival in Nepal is similar to that of the most-famous Jallikattu in Tamil Nadu of India and the Spanish Bullfight.

Apart from being a tradition, this unique bullfighting event is also adding to the promotion of Nepal tourism.