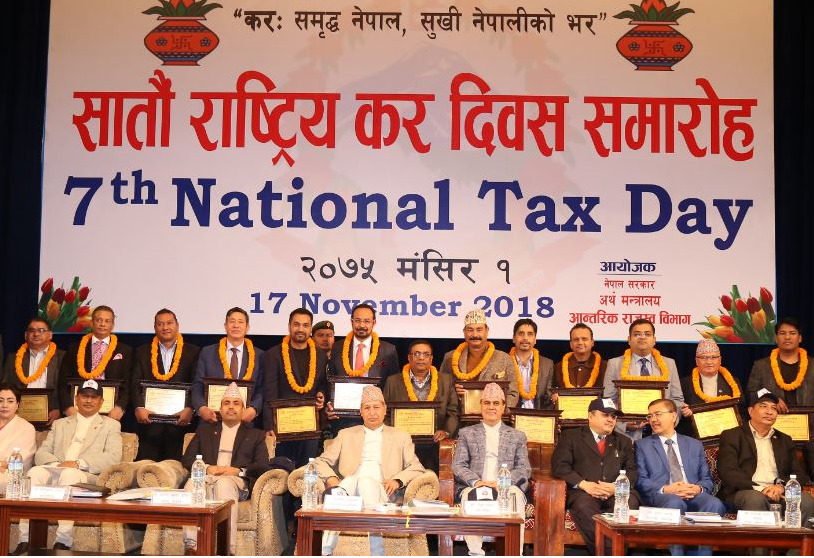 Marking the 7th National Tax Day on November 17, 2018, the Government of Nepal took an innovative step that encourages the public to pay taxes in time!

In an encouraging move, the government honored the country’s highest taxpayers including top companies in 15 different categories, at a program held by the Inland Revenue Department.

Officials feel that the move will promote tax-paying culture in Nepal.

Nepal-based MNC Surya Nepal emerged as the highest taxpayer even this time, leaving its mark for the third time in tax-paying to the Nepal Government.

Siddhartha Shumsher grabbed the recognition in the ‘individual category’ as the top taxpayer, continuing journey as the ‘top taxpayer’ for the sixth consecutive year.

Addressing the event, Finance Minister Yuba Raj Khatiwada urged every Nepali citizen to be liable for voluntary tax-payment depending on their level of income and ensure timely payments.

Stating that every lowest taxpayer is also a respectable tax-payer, the Minister said that the non-payment of taxes will hinder the country’s growth progress. In this regard, he also informed that the government is working towards manage taxation system alongside focusing on increasing the scope of taxation rather than tax rates.

Meanwhile, Finance Secretary Rajan Khanal also informed that the government’s efforts on tax reforms have received some benefits over the benefits.

The government has also recently set-up a tax consultation department to address public concerns about taxation.

Speaking on the occasion, industry bodies urged the government to ensure a business-friendly environment in the country.

They urged the government to ensure a conducive investment-friendly environment in the industrial sector and also facilitate the industry-friendly taxation system.

In this regard, the Nepali business community expressed their willingness to work with the government with regard to taxation and related payments.

Director General of the Inland Revenue Department Bishnu Prasad Nepal informed that the Department is working with government on economic and revenue mobilization policies.

We are also working on ways to raise awareness among tax-payers besides and have been providing needed concessions that encourage tax-payers.

Hope the constructive and collaborative efforts of the public-industry-government would drive the budget promises, driving the Nepali economy towards a structured growth.